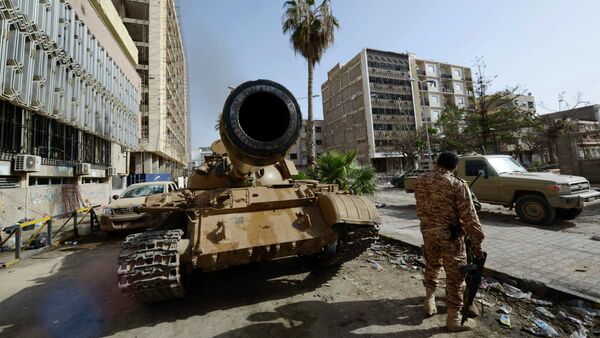 “Government authorities and non-state actors who control territory should urgently condemn attacks on journalists and where possible hold those responsible to account,” Joe Stork, HRW deputy director for Middle East and North Africa was quoted as saying in a statement published on the organization’s website.

The report titled "War on Media: Journalists under Attack in Libya" documented at least 91 cases of journalists being threatened and assaulted between September 2012 and November 2014. Among them, eight were killed in attacks by armed groups while another 30 were kidnapped or detained, mostly by militias.

In August 2014, militias attacked the Alassema TV headquarters in the capital Tripoli, while in May, prominent journalist Miftah Bouzeid was shot dead by an unidentified gunman in the second largest city Benghazi.

Since 2011, there has not been a single case in which officials prosecuted those responsible for attacking journalists or media outlets, the report said.

After the 2011 revolution that saw Muammar Gaddafi lose power, journalists in Libya began to report news in a more free environment and were free to express opinions and criticize politicians, according to the rights group.

However, as post-civil war hostilities intensified in May 2014, militiamen, facing near immunity from prosecution, started targeting journalists, HRW reported. Many media workers have fled the country, fearing for their lives.

Meanwhile, Libya continues to be hit by violence as two governments claim legitimacy and various armed groups attempt to take control of the country.