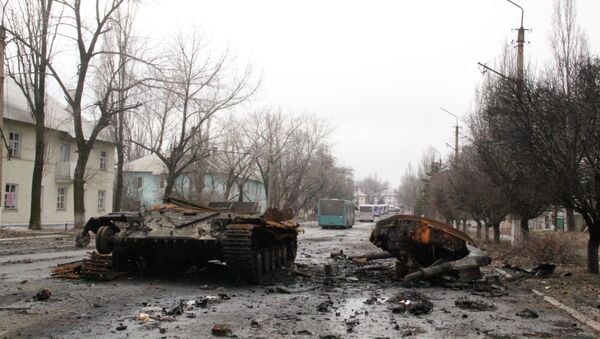 The strategic highway, which provided deliveries of ammunition and equipment to Ukrainian forces encircled in Debaltseve, was completely blocked by Donetsk People’s Republic militia, according to the statement of Donetsk military headquarters.

Kiev Orders to Mine Entire Rail Infrastructure in Debaltseve
DONETSK, (Sputnik) – The pro-independence militia in eastern Ukraine claimed Monday it took control over a strategic highway used to supply weapons and equipment for Ukrainian forces in Debaltsevo, the Donetsk military said.

"Currently this strategic highway, which provided deliveries of ammunition and equipment to Ukrainian forces encircled in Debaltsevo, is completely blocked by the DPR [Donetsk People's Republic] Army," a representative of the DPR headquarters told RIA Novosti.

The source said that pro-independence forces pushed Ukrainian forces out of Logvinovo, which borders the highway.

One of Ukraine's biggest railroad junctions, Debaltsevo has become the area of intense clashes between the Ukrainian military and independence militias in recent weeks.

Reports continue to emerge of ongoing shelling in Debaltsevo, despite a temporary ceasefire agreement reached last week to evacuate civilians from the area. According to the reports, up to 10,000 Ukrainian troops remain surrounded after recapturing the contested town last July.