West Must Provide Arms to Ukraine to 'Counter Russia' - McCain 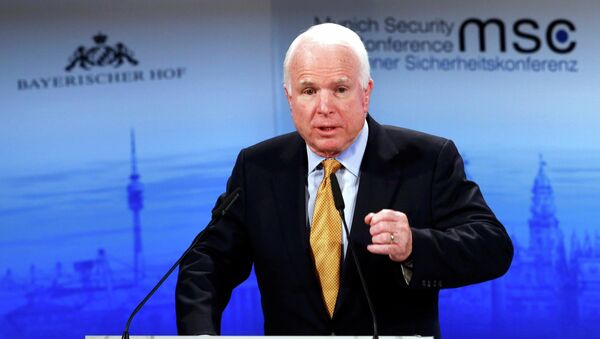 US Senator John McCain said that "Russia is emboldened by a significant modernization of its military, resurrecting old imperial ambitions and intent on conquest once again."

"In the heart of Europe we see Russia embolden by a significant modernization of its military, resurrecting old imperial ambitions and intent on conquest once again," McCain said addressing the Munich Security Conference.

The 78-year-old politician once again accused Russia of military aggression against Ukraine, claiming that President Vladimir Putin "does not want a diplomatic solution," but wants to "dominate Ukraine as well Russia's other neighbors."

McCain argued that the West must provide "defensive arms" to Kiev in order to "increase the military cost" of alleged Russian forces in Ukraine.

Mogherini Calls for More Financial Aid to Ukraine
The United States and a number of other nations have repeatedly accused Moscow of providing military aid, including troops to southeastern Ukraine's independence supporters. Russia has insisted that it is not a party to Ukraine's internal crisis and dismissed accusations of being involved to the armed conflict as groundless.

Moscow has repeatedly stated that there is only a political solution to the Ukrainian crisis. Moreover, Russia along with the Organization for Security and Co-operation in Europe (OSCE) mediates Contact Group talks between Kiev and Donetsk and Luhansk people's republics.

Russia is also part of the Normandy format talks on Ukrainian reconciliation, which also includes Ukraine, Germany and France.

Washington currently provides Kiev with non-lethal assistance. In January, western media, citing sources in the US government, reported that Washington is considering supplying lethal aid to Kiev, such as Javelin anti-tank missiles.