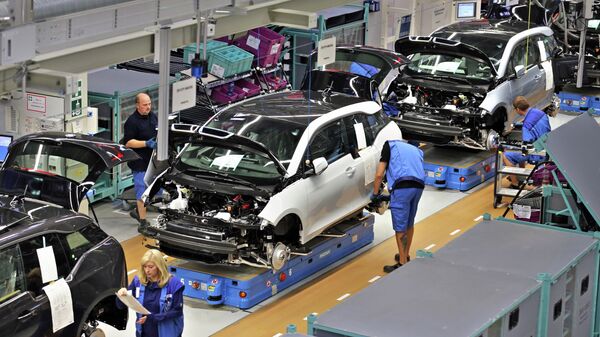 According to Russian Foreign Ministry German business community hopes for an end to the EU sanctions against Russia.

Putin-Merkel-Hollande Talks on Ukraine May Influence Anti-Russia Sanctions
MOSCOW, (Sputnik) – German business community hopes for an end to the EU sanctions against Russia, the Russian Foreign Ministry said in a communique Saturday.

The statement was posted on the ministry's official webpage after Russian foreign policy chief Sergei Lavrov met with German Vice-Chancellor and Economy Minister Sigmar Gabriel on the margins of the Munich Security Conference in the Bavarian capital.

According to the communique, the discussion brought out the "readiness of the German business to continue participating vigorously in the Russian market, and a great interest in a sooner end to the sanctions standoff."

Lavrov condemned a widening rift between Russia and the European Union, and spoke of "unjust" and "destructive" nature of EU sanctions.

The ministers had "an interested opinion exchange that focused on a huge potential in bilateral trade, economic and investment cooperation," the statement added.

The European Union took the US cue last year to impose economic sanctions against Russia over Ukraine crisis, in a move criticized by Moscow but also by its major trade partners in Europe – Germany and France. Moscow retaliated by introducing a year-long ban on food imports from the countries that had imposed anti-Russia sanctions, including the EU members states.