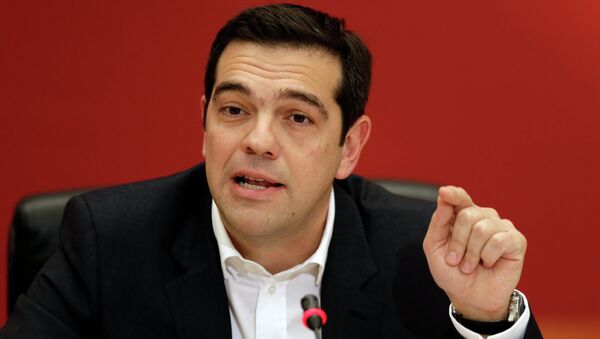 © AP Photo / Thanassis Stavrakis
Subscribe
Prime Minister Alexis Tsipras and Finance Minister Yanis Varoufakis are both taking trips around European capitals in an effort to drum up support against austerity measures in spite of opposition from Germany.

Germany vs Greece: Merkel Says 'Nein' to Greek Debt Negotiation
MOSCOW, February 2 (Sputnik) – Greek Finance Minister Yanis Varoufakis is travelling to London on Monday for talks with UK Chancellor George Osborne about renegotiation of the country's debt obligations, while Prime Minister Alexis Tsipras is this week planning trips to Rome, Paris and Brussels in a bid to gather support for the politics of anti-austerity; however, officials in Germany continue to voice their strong opposition to the Greek proposals.

In Paris on Sunday after meeting with French counterpart Michel Sapin, Bloomberg reported that Varoufakis told journalists Greece is "not going to ask for any more loans," before a May deadline set by his government to agree a new deal on the country's bailout, adding that "during this period, it is perfectly possible in conjunction with the ECB to establish the liquidity provisions that are necessary."

Meanwhile, Tsipras, whose government is demanding that more than half of the country's €315bn debt be written off by its creditors, sought to give assurances to European politicians and jittery investors alike after a week in which the value of Greek stocks declined dramatically. "No side is seeking conflict and it has never been our intention to act unilaterally on Greek debt," Deutsche Welle reports the Prime Minister said in a statement before Varoufakis left for Paris.

Reports from Germany suggest that Chancellor Angela Merkel as well as the public at large remain steadfast in their opposition to writing off the debt, which in a 2012 renegotiation was cut by €100 billion. "There has already been voluntary debt forgiveness by private creditors, banks have already slashed billions from Greece’s debt," the Guardian reports Merkel telling the German Hamburger Abendblatt newspaper on Saturday. After a poll of Germans in which 76 percent expressed their opposition to a write-off, the Chancellor maintained: "I do not envisage fresh debt cancellation."

Ahead of Sunday's meeting AFP reported French Finance Minister Sapin echoed Merkel's sentiment, but added that there was some room for flexibility on the terms of the bailout. "We can discuss, we can postpone, we can alleviate. But we won’t cancel it."

In spite of such setbacks, Greek politicians remain upbeat about their chances of making a deal, with Varoufakis in Paris expressing his desire to meet with German Finance Minister Wolfgang Schaeuble. The finance minister also said he intended to make trips to Berlin, Frankfurt and Madrid in search of support for a deal to end austerity, which he claims would be beneficial not just for the welfare of Greece, but also for that of the average European citizen.