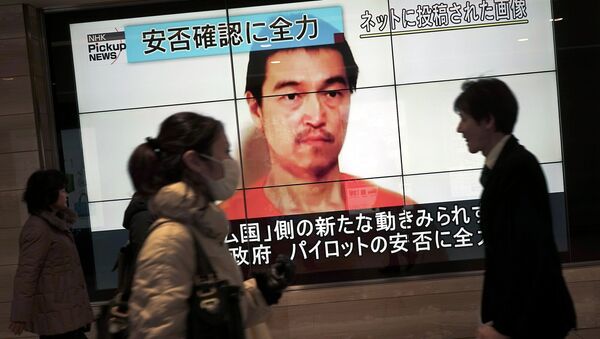 © AP Photo / Eugene Hoshiko
Subscribe
UN Security Council stated that Japanese freelance reporter's execution demonstrates the brutal tactics of IS militants, who are responsible for thousands of abuses of people in Syria and Iraq, and underlined the need to bring the perpetrators to justice.

UNITED NATIONS, February 1 (Sputnik) — The UN Security Council condemned on Sunday the execution of Japanese freelance reporter Kenji Goto by Islamic State (IS) extremists, who have released a video capturing the killing.

"The members of the UN Security Council deplore the apparent murder of a Japanese citizen Kenji Goto, by the Islamic State of Iraq and the Levant (ISIL), despite their demand for his immediate release, and strongly condemned this heinous and cowardly murder," the statement read.

UN Security Council members stressed that Goto's execution has once again demonstrated the brutal tactics of IS militants, who are responsible for thousands of abuses of people in Syria and Iraq, and underlined the need to bring the perpetrators to justice.

Ban Ki-moon Condemns Islamic State's Killing of Japanese Hostage Kenji Goto
"The members of the Security Council stressed that those responsible for the killing of Kenji Goto shall be held accountable, and urged all States, in accordance with their obligations under international law and relevant Security Council resolutions, to cooperate actively with Japan and all other relevant authorities in this regard," the statement said.

Security Council stressed that such militant groups as ISIL, Al-Nusra Front and all other individuals, undertakings, and entities associated with Al-Qaida must be defeated.

UN also urged and immediate release of all the individuals who are kept hostage by those militants, including the IS-held Jordanian pilot.

The most recent video that IS extremists have released shows the Japanese hostage Kenji Goto kneeling in front of a masked man armed with a knife. Japanese Defense Minister Gen Nakatani has said he could not refute reports of Goto"s killing.

On January 24, IS released a video depicting Goto holding an image of what appeared to be the beheaded body of another Japanese hostage, Haruna Yukawa.

The militants initially demanded a $200-million ransom for the two Japanese captives, but later changed their demand, asking for the release of a suicide bomber, Sajida Rishawi, who participated in a 2005 attack on a wedding party in Jordan, but survived after her explosives failed to detonate. In return, jihadists pledged to release the Jordanian pilot Muath Kasaesbeh, who was captured by the Islamic radical group after his plane crashed near the IS stronghold of Raqqah in Syria on December 24, 2014.

As of Sunday, Kasaesbeh's fate remains in limbo, with Jordanian government ready to carry out the swap deal.

The Islamic State is a jihadist group that has taken areas of Iraq and Syria under its control. Infamous for their cruelty, the insurgents have kidnapped large numbers of people. Last year, the group released several videos purporting to show the executions of its hostages, which included US journalists James Foley and Steven Sotloff and British aid workers David Haines and Alan Henning.