Six Myths of Russian Vodka Put to the Test 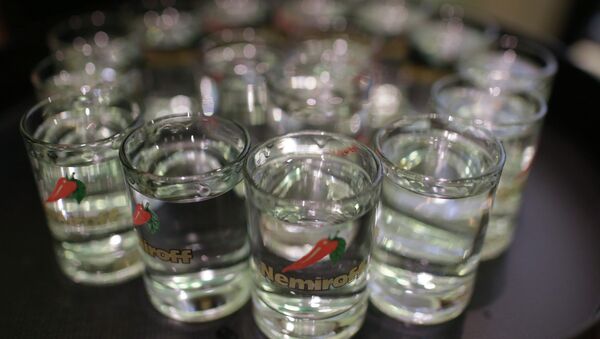 The six most popular myths about vodka and the truth behind them.

Extravagant Alcohol Spending Causes Headache for Netanyahu
MOSCOW, February 1 (Sputnik) — Russian vodka has garnered a legendary status around the world, developing its own mythology and attracting countless urban legends. Here are six of the most popular myths related to the drink.

Myth 1: Russian vodka was invented by Dmitry Mendeleev, creator of the periodic table

Wrong. Dmitry Mendeleev is often credited with standardizing vodka's 40% strength, based on his PHD paper "A Discourse on the Combination of Alcohol and Water." However, Ethanol, on which vodka is based, was originally synthesized by Arabian scholars in the 11th century. They, however, only used it for medicinal purposes due to their religious beliefs. The original vodka, known back than as 'aqua vitae' ("water of life") was brought to Russia in the 14th century, and presented to the Muscovite Prince Dmitry Donskoy in 1386 by an envoy from Genoa.

Myth 2: Vodka is the least harmful of all alcoholic spirits

Wrong. Drinks based on rectified alcohol (such as ethanol) are much more addictive and toxic than distilled alcoholic beverages such as whisky.

Myth 3: Vodka is purified with milk

Wrong. While a popular sales pitch, it is completely off the mark. Ethanol is already pure to begin with and needs no further purification, and methanol can only be purified by using coal.

95 Years Since 18th Amendment to US Constitution Went Into Effect
Myth 4: Vodka can be used as a cold cure

Wrong. While there are many folk recipes for cold medicine involving vodka (such as vodka mixed with pepper or honey) it won't help cure your sniffles. Even worse, alcohol has a detrimental effect on your immunes system so it could make you feel even worse. However, Vodka can  be used to reduce a fever for a short period of time by applying it to the skin, usually as a compress.

Myth 5: Vodka warms you up in cold weather

Wrong. Drinking vodka makes the body’s capillary vessels expand; bringing your blood closer to the surface of the skin and so actually increasing your rate of heat loss (see Myth 4). Actually, what happens is that alcohol increases your pain threshold merely making you unaware of the damage done to your body by the cold.

Myth 6: Vodka has no expiration date

Remarkably, this one is true. While some experts argue that vodka must not be kept in storage for more than 12 months, this only applies if the bottle has already been opened.