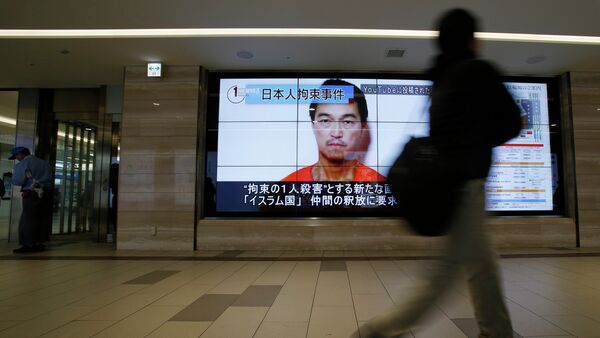 According to Kyodo, Nakatani has ordered to provide full security to Japan's self-defense forces stationed abroad, including within the framework of UN peacekeeping operations.

Video of Japanese Journalist's Execution Genuine
Earlier, Kyodo quoted Nakatani as saying that he had no information refuting reports that Goto had been killed. The reports were based on a new video that had been released online. The video showed Goto kneeling in front of a masked man armed with a knife.

Japanese Hostage Reportedly Beheaded by Islamic State Militants
On Wednesday, a Jordanian government spokesperson said that the country was ready to release the Iraqi bomber in exchange for Kasaesbeh.

On Thursday, Jordan's Information Minister said the country had demanded IS to prove that Kasaesbeh was still alive, but received no response from the militants.