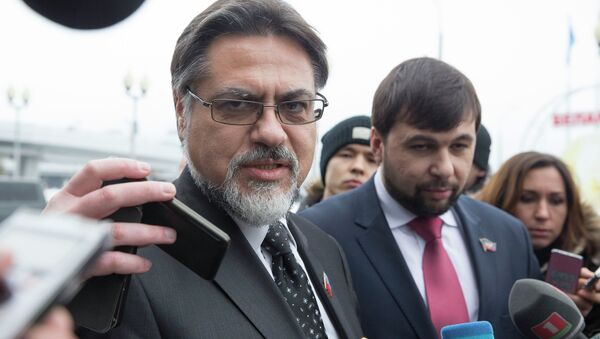 © REUTERS / Vasily Fedosenko
Subscribe
Representatives of the self-proclaimed people’s republics of Donetsk and Luhansk announced that the negotiators of the Contact Group on Ukrainian reconciliation have failed to sign a final document on the results of the talks in Minsk, having only managed to voice their stances.

MINSK, February 1 (Sputnik) – The negotiators of the Contact Group on Ukrainian reconciliation have failed to sign a final document on the results of the talks in Minsk, having only managed to voice their stances, representatives of the self-proclaimed people’s republics of Donetsk and Luhansk (DPR and LPR) have announced.

DPR Envoy Says Participants of Minsk Talks Only Managed to Voice Positions
"I cannot say that today's meeting was productive. We have only just managed to exchange our stances," Denis Pushilin, DPR envoy at the Contact Group talks held in the Belarusian capital, told reporters Saturday.

Pushilin stressed that Kiev, which launched a military operation against independence supporters in the Donetsk and Luhansk regions last year, is responsible for the ongoing conflict in southeastern Ukraine.

"The conflict, which was caused by the Ukrainian side and led to a huge civilians' death toll, destruction of infrastructure and residential areas forced us to launch a counteroffensive and the line of contact has changed its boundaries," the DPR envoy explained.

According to Pushilin, Kiev is against the actual line of contact between Ukrainian forces and independence supporters and insists on fixing it as was agreed on in September, 2014.

"The actual line [of contact], on implementing of which we have to insist, is quite objective," Pushilin stressed, adding that the “Ukrainian side is against the actual line, it insists on the line fixed on September 19, [2014]".

Ukrainian Armed Forces Preparing New Offensive in Donbas
LPR envoy to the Minsk talks, Vladislav Deinego, told RIA Novosti Saturday that discussions of the final agreement between Kiev and independence supporters are “still underway”, although the Saturday meeting ended with no results.

LPR leader Igor Plotnitsky stressed Saturday that Kiev had failed to fulfill the Minsk meeting requirements by not officially appointing its representative to the talks.

Earlier in the day, Leonid Kuchma, the Kiev Contact Group envoy, accused the independence supporters of breaking the negotiations down, particularly because the leaders of Donetsk and Luhansk people’s republics did not show up.

"If Kuchma wants to accuse Zakharchenko [DPR leader] and I, he should first remember that…in order for Leonid Danilovich [Kuchma] to take part in the negotiations, there must be an official appointment of him as an authorized representative," Plotnitsky said Saturday.

"Leonid Danilovich [Kuchma]…demonstrated some document, which doesn't make it clear when it was published. No powers are listed," the DPR envoy to the Minsk talks told journalists Saturday.

According to Pushilin, Kuchma is not a Ukrainian civil servant.

Contact Group Meeting on Ukrainian Crisis Closes in Minsk
These factors "relieve him from responsibility in the event of not fulfilling the agreement", Pushilin said.

Kiev and independence supporters managed to reach a ceasefire deal during an earlier Minsk Contact Group meeting held in September, 2014. However, despite the truce, confrontation between the two conflicting sides intensified severely in January. According to the United Nations, Ukraine’s southeast has seen the worst hostilities since the start of the conflict in the first month of 2015.