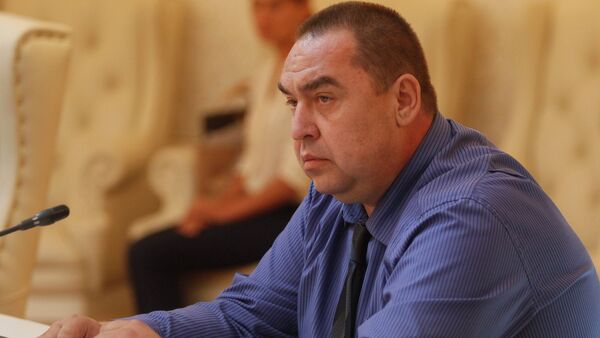 © Sputnik / Egor Eryomov
/
Go to the photo bank
Subscribe
Leader of the self-proclaimed Luhansk People's Republic says that Kiev failed to fulfil requirements by not officially appointing its representative to the Contact Group on Ukrainian crisis.

MINSK, January 31 (Sputnik) – Kiev failed to fulfil requirements by not officially appointing its representative to the Contact Group on Ukrainian crisis, the leader of the self-proclaimed Luhansk People's Republic Igor Plotnitsky said.

Earlier in the day, Leonid Kuchma, the Ukrainian Contact Group envoy, accused the independence supporters of breaking the negotiations down, particularly because the leaders of Donetsk and Luhansk did not show up.

"If Kuchma wants to accuse Zakharchenko [Donetsk leader] and I, he should first remember that…in order for Leonid Danilovich [Kuchma] to take part in the negotiations, there must be an official appointment of him as an authorized representative," Plotnitsky said.

"Leonid Danilovich [Kuchma] now demonstrated some document, which doesn't make it clear when it was published. No powers are listed," the Donetsk envoy told journalists.

According to Pushilin, Kuchma is not a Ukrainian civil servant. These factors "relieve him from responsibility in the event of not fulfilling the agreement," Pushilin said.