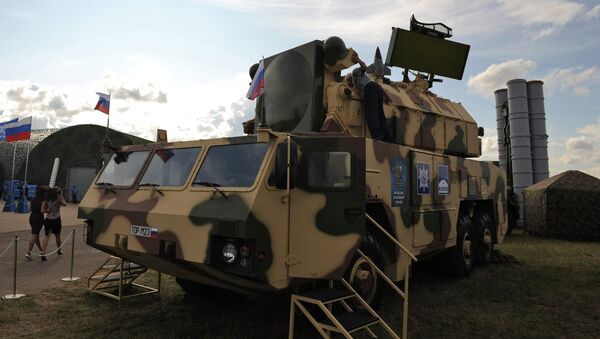 © Sputnik / Grigoriy Sysoev
/
Go to the photo bank
Subscribe
The new Tor-M2KM and Tor-M2E systems prevented drone-based terrorist attacks during the Winter Olympics in Sochi, a representative of the systems' manufacturer told Sputnik.

Russia in Talks With Iran on Tor-M1 Missile System Modernization
MOSCOW, January 30 (Sputnik) — Russia's newest "Tor" anti-air defense system was used to prevent drone-based terrorist attacks against the Winter Olympics in Sochi, a representative of the plant that produces the systems told Sputnik.

"According to participants in the operation, they put in some serious work, preventing attempts at terrorist attacks that used drones, as well as balloons. Our unit successfully managed security at the Sochi Olympics," Vyacheslav Kartashov said.

Kartashov also also told Sputnik that the systems will be used to provide security at the 2018 World Cup in Russia, as the Tor-M2KM modification is modular and can be put on any platform.

Russia Develops Two New Drones, Ready for Testing
He also explained that the system is unique in that it is designed to destroy guided "smart bombs" and other modern high-accuracy weapons.

"The Tor type guided anti-air missile has a unique shrapnel, made from a high-density alloy, which has a special mass and form," Kartashov said. "This shrapnel has a high probability of punching through the shell of a guided bomb and detonating the explosives inside."

Kartashov said that the Tor system has practically no foreign-made components, making its production almost unaffected by sanctions.

Three Russian Military Aircraft Make Flightglobal's 2015 Top 10 Ranking
The company has contracts with the Greek, Indian and Iranian militaries to service and modernize older Tor and Osa anti-air systems, and will be presenting the new Tor systems at the Aero India expo in Bangalore in February.

Vyacheslav Kartashov is the assistant to the general director on military-technical cooperation and government procurements at the IEMZ Kupol plant which makes the systems.