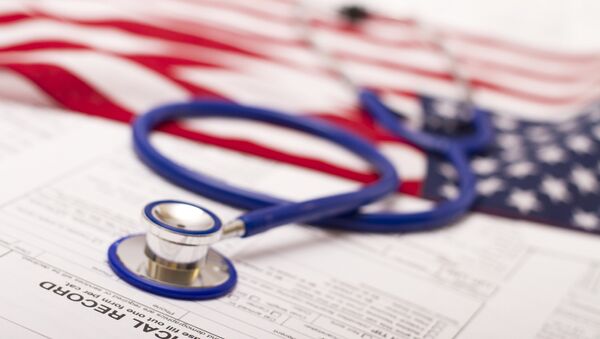 © Fotolia / Yaroslav Pavlov
Subscribe
According to the data released by the non-profit health policy organization Kaiser Family Foundation, 32 percent of Americans want to revoke Obamacare and another 14 percent would like the law to be scaled back.

WASHINGTON, January 28 (Sputnik) — About one-third of US citizens are in favor of revoking the Affordable Care Act (ACA), also known as Obamacare, according to the data released by the non-profit health policy organization Kaiser Family Foundation Wednesday.

Obamacare Should Be Replaced With ‘Real Reforms’, US Senator Claims
“About a third (32%) say they favor repeal, another 14 percent would like the law scaled back, 19 percent want the law to move forward as is, and nearly a quarter (23%) would like to see the law expanded,” the poll showed.

The data reflects the division of US public on what the Congress should do next with Obamacare, according to the Kaiser Family Foundation.

In March 2015, the US Supreme Court is going to rule whether the assistance in purchasing insurance provided to low or moderate income residents of 37 states through ACA can be received from state-run marketplaces only. Depending on the court’s decision, more than 13 million people could lose subsidies in 2016, according to the foundation’s report.

“A majority (59%) of residents in the healthcare.gov states say they would want their state to act to operate its own exchange if the Supreme Court limits the financial assistance to eligible residents in states with state-run exchanges,” the results of the poll said.

Obamacare Improves US Patient Safety: Department of Health
However, people across parties have similar expectations to what will actually happen with Obamacare in the near future, with 31 percent expecting major, and 32 percent minor changes.

Republicans, who now control the Congress, have long been calling Obamacare “unworkable,” urging to replace the program with other reforms.

The White House insists that the ACA is a much-needed law that prohibits insurance companies from discriminating against people with pre-existing conditions, saves money and insures higher quality care.