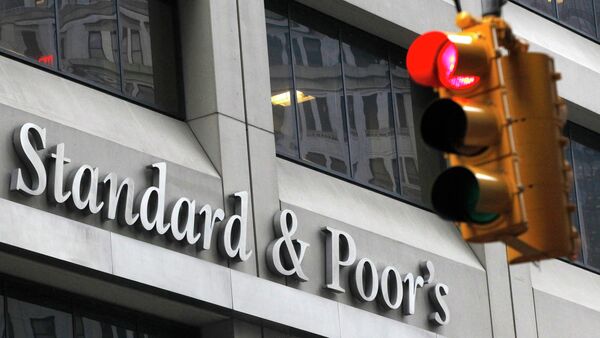 Anti-Russian sanctions and a prospect of future sanctions are the key reasons for downgrading Russia's rating, experts say.

S&P Downgrades Russia's Sovereign Rating to 'Junk' BB+ Status
WASHINGTON, January 27 (Sputnik) – Current anti-Russian sanctions and a prospect of future sanctions that cause an overall unfavorable economic climate in Russia are the key reasons for downgrading Russia's rating to a "junk" level by Standard & Poor's, experts have told Sputnik.

"In the context of Russia the biggest factor [for rating downgrade], of course, is the existence of international sanctions and the possibility of future international sanctions that may affect not only Russia's ability to raise money, but affects the macro economy of Russia," Associate Professor of Law at George Washington University (GWU) Jeffrey Manns told Sputnik Monday.

There are significant concerns about Russia's ability to continue to finance its debt externally "on the type of favorable credit terms that it has enjoyed in the past" Manns explained.

However, according to the expert, "the downgrade does not mean that Russia will not be able to finance its debt, it simply means that prospective creditors will look at the ratings as one of the set of criteria and factor that into the terms upon which they will lend money to Russia in the future".

"In terms of the question of a political motivation, I would say that certainly is a qualitative factor that goes into credit rating, and those qualitative factors raise particular concern in the context of sovereign states," Manns, who specializes in financial institutions and regulators, said.

"I do not view the S&P rating change for Russia as politically motivated, Russian government itself understands well that objective economic factors have changed in Russia," Norberg told Sputnik Monday.

"I don't believe any anti-Russia conspiracy is at play here," he added.

RAPP executive director's main concern is the impact that the decline in Russian economy may have on the EU economy, and by extension on the US and global economy. He explained that in recent years Russia had accounted for as much as 25 percent of EU export sales.

Relations between Russia and the West significantly deteriorated in 2014 over the Ukrainian crisis. The United States, the European Union and their allies did not recognize Crimea's reunification with Russia, accused Kremlin of interfering in the Ukrainian conflict and imposed several rounds of sanctions against Moscow. The sanctions targeted the country's banking, energy and military sectors, as well as certain individuals.

Russia has repeatedly denied being involved in the situation in Ukraine, stressing that sanctions are counterproductive and hurt not only the target country but those using the measure as well.

In August, 2014, Russia imposed a one-year ban on certain food imports from countries that imposed sanctions on Moscow.