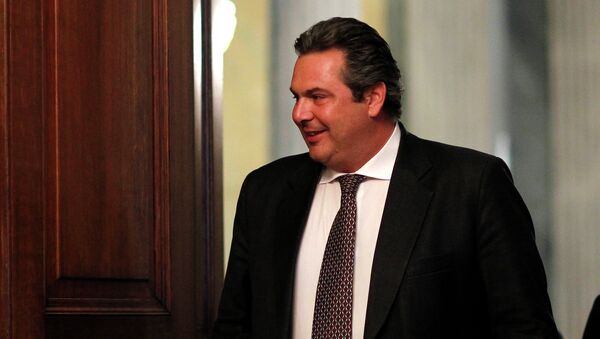 According to Kammenos, ANEL will help Syriza, which is running ahead of the incumbent New Democracy party in country's parliamentary elections, stabilize the situation for the benefit of the country and the Greek people.

"I contacted Tsipras, congratulated him on his victory and said that Independent Greeks, as we have been saying from the very beginning, support the changes on the political scene in our country on the principles, which we announced publicly," Kammenos said in elections press center.

According to the data from 75 percent of polling stations across the country, Greece's leftist Syriza party is leading the country's snap elections with 36.12 percent of the votes and receives 149 seats of the parliament's 300 seats.

The ANEL party gets 4.7 percent of the votes and 13 seats in parliament, which is enough to create a coalition government with Syriza.

A total of seven parties have managed to pass the 3-percent threshold needed to enter the parliament.

The radical left Siryza party has promised in its pre-election campaign to put an end to the widely unpopular austerity measures imposed by EU bankers, including severe budget cuts and tax hikes.