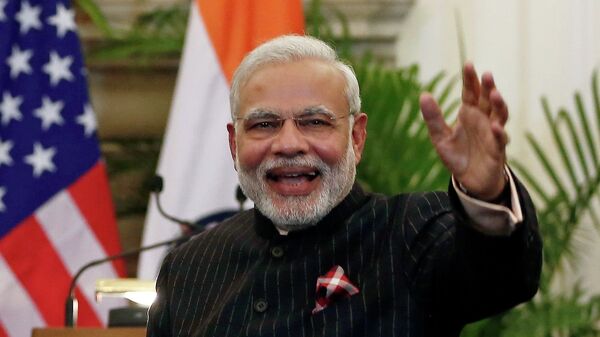 © REUTERS / Adnan Abidi
Subscribe
International
India
Africa
India has secured a nuclear deal, previously subject to delays, as a result of Obama's visit to the country.

"We have broken the logjam over the past few years on the civil nuclear issue," Indian Foreign Secretary Sujata Singh said during a press conference after the talks between US President Barack Obama and Indian Prime Minister Narendra Modi.

The meeting, highlighted by a strong personal chemistry between the two leaders, has led to the implementation of a nuclear pact originally signed in 2008, which will give India access to civilian nuclear technology, according to AFP. The agreement's implementation previously stalled due to US fears after India's nuclear legislature, putting the blame for any accidents on suppliers, significantly hampered the process. In addition, India has been excluded from world cooperation in nuclear energy for decades since it is not a party to the nuclear Non-Proliferation Treaty.

World
US-India Relations From 1946 to Present Day
"We are committed to moving towards full implementation and this is an important step that shows how we can work together to elevate our relationship," Obama told AP.

On Monday, the US leader will attend India's Republic Day celebrations as a chief guest, with his wife, Michelle Obama. It will mark the first time the US president has been invited to the parade.

This is also the first time an incumbent US president has made a second visit to India. The first official trip of Barack Obama to New Delhi took place in November 2010.

Indian Prime Minister to Visit Russia Twice in 2015
Ahead of the current US president’s visit, Indian authorities took unprecedented security measures, with thousands of personnel deployed in India’s capital.

Following a visit to India earlier in January, US Secretary of State John Kerry, stated that the two countries will strengthen their partnership in combating terrorism, deepen their dialogue on key political and security issues, as well as boost sustainable economic development and growth in both countries.