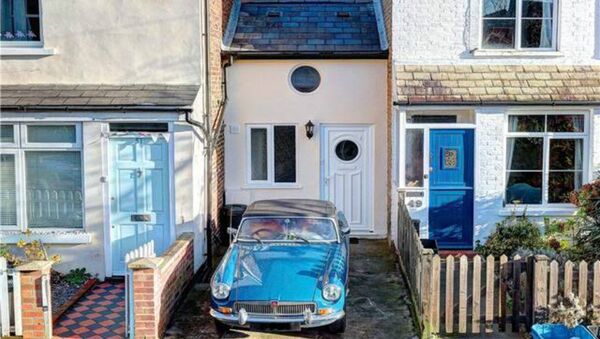 Almost 90,000 UK Children in Emergency Housing for Christmas: Labour Party
MOSCOW, January 24 (Sputnik) – A house in Twickenham, southwest London, has gone on sale for almost a third of a million pounds despite having a width of only 2.6 meters, the Daily Mail reported on Friday.

"It's a fantastic property but quite an unusual one to show people round. It's a bit of a marmite house — people either love it or hate it — but I think it will be sold very quickly,” estate agent Russell Gooden from agency Jackson Stops and Staff told the newspaper. "We're certainly enjoying having it on our books."

Despite having only 30 square meters of living space, the house manages to pack in a kitchen, living area and two beds, one a mezzanine above the kitchen. The tiny property is dwarfed by the size of its garden to the rear, which is almost five times the size of the house, which was built as an additional self-contained living space for the property adjacent to it.

"It's 51A, and the bit of land used to be part of 51. Now, that used to be a bit of a granny annexe for next door and then whoever sold it at the time it was separated.” Agent Tom Millington from JSS told the London Evening Standard on Friday. "We've had loads of interest. I've got an enquiry now to go and have a look, and we've had quite a few viewings this week."

300,000 Disabled People in Britain Live in Unfit Housing: Report
The high price is a symptom of the capital's housing shortage, as a result of which buyers are prepared to pay exorbitant prices for increasingly small properties. In September last year the Telegraph reported that Britain's smallest home, a 17.5 square meter converted former storage shed in London's Islington, was on the market for £275,000 ($412,000).

"We are not building enough new homes,” Anna Scott-Marshall, from the Royal Institute of British Architects (RIBA), told the Telegraph. “There is a need for a great deal more than is available, which is why people will settle for crazy options. And why developers are getting away with building tiny homes.” Scott-Marshall added that population growth, limited land and property developers seeking greater margins are to blame for a decrease in the size of new homes. According to RIBA, the size of new housing has shrunk greatly during the last century, with the average size of a three bedroom house having decreased by almost half since the 1920s, to 88 square meters.