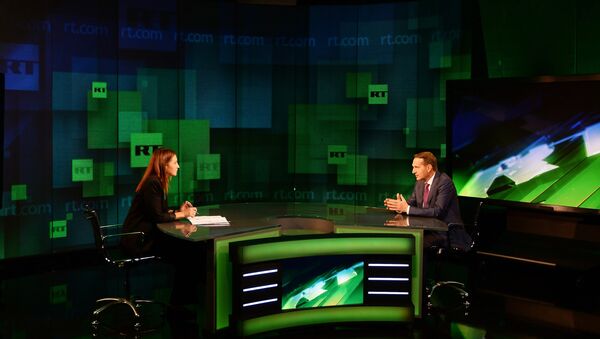 © Sputnik / Maksim Blinov
/
Go to the photo bank
Subscribe
Department of State spokesperson said that news media outlet Russia Today and terrorist organizations Islamic State and Boko Haram should not be labelled together as the main challenges that the United States faces.

WASHINGTON, January 24 (Sputnik) — News media outlet Russia Today (RT) and terrorist organizations Islamic State (IS) and Boko Haram should not be labelled together as the main challenges that the United States faces, Department of State (DoS) spokesperson Jen Psaki said commenting on the remarks made by Broadcasting Board of Governors (BBG) agency’s head.

“The broad point is…would the US government put those three in the same category, no we wouldn’t,” Psaki said on Friday when asked whether she agreed with the comments of the BBG chief executive Andrew Lack that international media outlet RT, and terrorist organizations IS and Boko Haram were among the challenges that his agency faced.

US Media Head Lumps RT, Islamic State Together
Psaki said that although the DoS does share some of the same concerns which the federal agency executive implied in his remarks, the department “wouldn’t state it in those terms.”

“There are concerns I think that we agree with in terms of the fact that the Russia’s own independent media space is shrinking,” Psaki said. “The Kremlin continues to apply pressure on the few remaining outlets.”

On Friday Andrew Lack, labelled RT as one of the main challenges to his agency, along with radical militant groups such as the Islamic State and Boko Haram.

RT’s editor-in-chief Margarita Simonyan said that she was “extremely outraged” that Lack had put the news outlet “in the same breadth as world’s number one terrorist army,” according to RT.