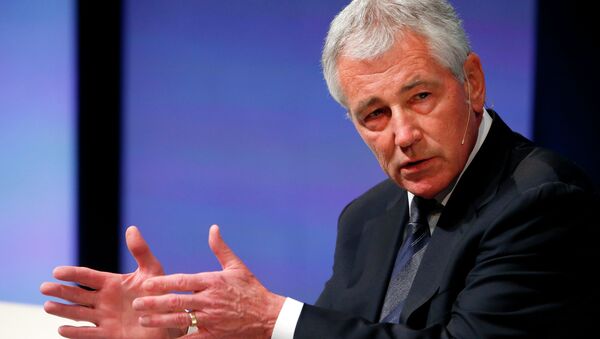 © REUTERS / Jonathan Ernst
Subscribe
The US Secretary of Defense says that Iraqi Prime Minister Haider al-Abadi’s complaint that the US-led coalition’s provision of training and weapons to Iraq is proceeding too slowly is groundless.

WASHINGTON, January 23 (Sputnik) — The Iraqi Prime Minister Haider al-Abadi’s complaint of the slow pace of the US-led coalition’s training and weapons to Iraq is groundless, US Secretary of Defense Chuck Hagel said.

“I do disagree with the Prime Minister’s [Haider al-Abadi’s] comments, I would say even further, I don’t think they’re helpful,” Hagel said during a press briefing on Thursday.

Hagel argued that the United States was doing “everything we possibly could to help Iraqis,” and said that the Prime Minister al-Abadi should be “more mindful” of the US-led coalition’s help to Iraq.

UK Foreign Office Says Coalition to Rearm, Retrain Iraqi Army to Fight IS
On Wednesday al-Abadi had praised the US-led coalition’s air campaign, but said that the international community was stalling in its commitments to train and equip ground forces.

Britain’s Foreign Secretary Phillip Hammond said on Thursday that the coalition had discussed the progress made so far against Islamic State (IS), during a meeting in London with 21 coalition members, including Iraqi Prime Minister al-Abadi. Additionally, Hammond added that the coalition would roll back its offence against the extremist group in the Middle East and retrain and Equip the Iraqi army to make it more effective.

In September US President Barack Obama formed the current international anti-IS coalition. Washington began extending its airstrikes against the militants into Syria, while continuing airstrikes against the group’s targets in Iraq. The United States is in the process of arming and equipping Kurds, Iraqis and Syria’s moderate opposition to eradicate IS.

The IS is a radical Sunni group that has been active in Syria, but began launching attacks in northern and western Iraq in June. IS Radicals later that month, seized the Iraqi city of Mosul and announced that they had established a caliphate on the territory under their control which forced hundreds of thousands of people, including ethnic and religious minorities, to flee.