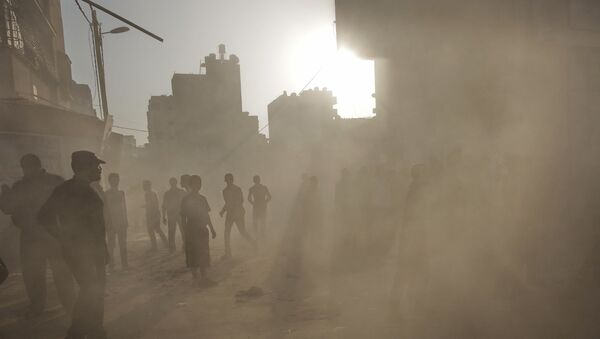 © Sputnik / Andrei Stenin
/
Go to the photo bank
Subscribe
Grassroots organizations Jewish Voice for Peace said that Israel used PR firms and lobby groups to reframe the country's image amid the conflict and oppression of Palestinians.

Earlier this week, the Corporate Europe Observatory (CEO) published a report which suggests that organizations lobbying the interests of Israel in the European Union are trying "to the point of surrealism" to improve the country's image and not let it be defined solely by the Israeli-Palestinian conflict.

"… Israeli hasbara (PR) is used to present a picture of Israel that obscures the conflict and the oppression of Palestinians," Naomi Dann, a media coordinator at Jewish Voice for Peace told Sputnik, adding that the "Brand Israel" campaign launched in 2005 is a good example of that. "Israel frequently employs PR firms, such as 30 Point Strategies, to work on its image on campuses and elsewhere."

Netanyahu Blames Palestinian Authority for Bus Stabbing in Tel Aviv
The Brand Israel program was commissioned by the Israeli Foreign Ministry to market a better image of the country. In 2011, the ministry enlarged the campaign, even spreading it to social networks.

"It makes sense to assume the European friends of Israel use PR professionals and I assume that they enjoy success here and there," Menachem Klein, a senior lecturer in Bar-Ilan University told Sputnik.

Dann explained that public relations are also used in tourist marketing, "which is often hyper-sexualized and also deploys 'pinkwashing' messaging that presents Israel as a safe place for LGBT people while obscuring the oppression of Palestinians."

The report by the Corporate Europe Observatory, entitled "Spin doctors to the autocrats: how European PR firms whitewash repressive regimes", notes a number of Israeli lobby organizations that have played an important role in promoting the EU-Israel Agreement Conformity Assessment and Acceptance of Industrial Products (ACAA) agreement, as well as conducted campaigns against the recognition of Palestinian statehood.

"Right next door to the European Commission are the offices of the European Friends of Israel (EFI), one of the largest pan-European parliamentary groups of its kind, with 1000 members of parliament from across the continent at national and European levels," the report says, adding that the EFI organizes events and briefings at the European Parliament

According to the report, "the EFI has been keen to reframe the image of the country as not just being defined by conflict, sometimes to the point of surrealism." On top of that, the EFI also organizes trips for parliamentarians to visit Israel, and has been "very pro-active in promoting the EU-Israel Agreement Conformity Assessment and Acceptance of Industrial Products (ACAA) agreement."

The ACCA agreement between the European Union and Israel came into effect on 19 January 2013. David Cronin, a political activist and author of "Europe's Alliance With Israel: Aiding the Occupation," told Sputnik that following EU concerns over violations of human rights in Israel, the country's mission to the European Union hired Kreab Gavin Anderson, a Swedish communication consultancy.

According to the CEO, the PR firm "was tasked with convincing MEPs that blocking ACAA was not the best way for them to show their objection to the expansion of Israeli settlements."

"The Israeli mission to the European Union hired Kreab Gavin Anderson to provide political insight. The campaign they ran was very misleading," Cronin said. "They decided to present the whole agreement as a fact that Israel is the leading manufacturer of generic medicines in the world, so if you want to have affordable medicine in Europe it is necessary for the Parliament to approve this agreement."

In the meantime, David Cronin underlined that even before the ACAA agreement came into place, Israel was already able to export its medicines to Europe and the ACAA would "have had no effect on the availability of these medicines whatsoever," Cronin added.

"I think the signing of the EU trade agreement does represent some success on the part of Israel's lobbying efforts, but it is also clear from recent developments in recognizing Palestinian statehood that the tide is turning against Israel in Europe," Naomi Dann told Sputnik.

Palestinians are striving to create an independent state on the West Bank territories, including East Jerusalem, partially occupied by Israel, and the Gaza Strip.