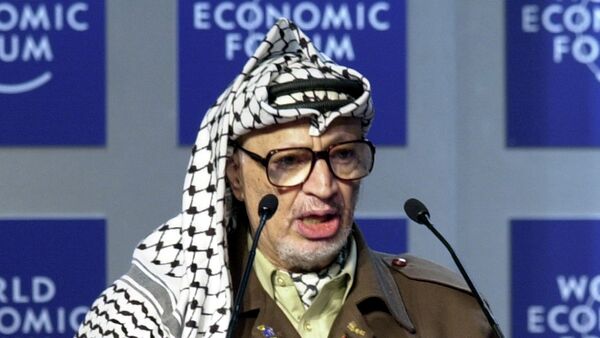 Radiation was not a factor in the death of Palestinian leader Yasser Arafat, the head of the Russian Federal Medical-Biological Agency told journalists Wednesday.

Palestine to Hold Talks on Statehood Resolution Failure in UNSC
MOSCOW, January 21 (Sputnik) — Palestinian leader Yasser Arafat died because of an inflammatory process caused by disease, not because of exposure to radiation, the head of the Russian Federal Medical-Biological Agency (FMBA) told journalists Wednesday.

Arafat, one of the most prominent figures of the Palestinian independence movement, died in 2004 in France.

"Radiation was not a factor in Yasser Arafat's [death]. No one poisoned him with any radiation. He died of a combination of several diseases peculiar to an elderly person," Vladimir Uiba said at a press conference.

Uiba explained that the disease very rapidly became septic. "An elderly man could not survive such a septic condition," the FMBA chief added.

The FMBA used Arafat's remains in comparisons with biological models of organs and systems affected by radiation exposure to arrive at its conclusions.

The Palestinian leader's widow disputed the results of a French medical report on the circumstances of her husband's death. French experts excluded the possibility of poisoning, contrary to the opinion of Swiss doctors, who earlier identified an increased presence of radioactive polonium-210 in Arafat's remains.

Palestinians accuse Israel of their leader's assassination, though the country denies this.