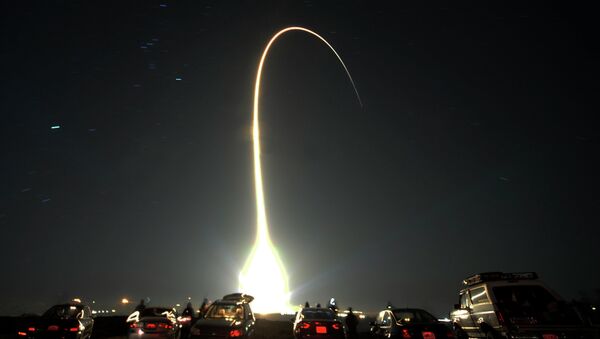 The system acts like a cell tower at 22,000 miles above Earth, providing “users a global, on-demand, beyond-line-of-sight capability to transmit and receive high-quality voice and mission data from a high-speed Internet Protocol-based system,” according to a Navy press release issued prior to the launch.

Two MUOS satellites were launched in 2012 and 2013, and the Navy plans to launch a total of five that will integrate with four ground stations and advanced software to provide secure communications to US warfighters.

“MUOS provides secure communications between warfighters around the globe, as well as connection with classified and unclassified networks and Department of Defense phone systems,” the Navy said. “This capability directly impacts dismounted, ground-based mobile users, who require secure voice and mission data, but is also available to ships, aircraft and vehicles. “

Currently, the United Launch Alliance (ULA), a joint venture that brings together Boeing and Lockheed Martin to provide launch services to the US government, uses the Russian made RD-180 rocket in the first stage to power the Atlas V launch vehicle into space.

The US 2015 National Defense Authorization Act (NDAA) prohibits the US Department of Defense from awarding or renewing contracts for launch vehicles that use Russian-made rockets. Under the NDAA, the current contract for ULA to use the RD-180, that runs until 2019, will not be affected.

The United States currently has enough RD-180 rockets to continue launches until 2016. After, if the supplies are stopped, there would be significant delays in the ability to launch national security satellites into space, according to an RD-180 Availability Risk Mitigation Study. The Department of Defense continues to search for alternatives to the RD-180.