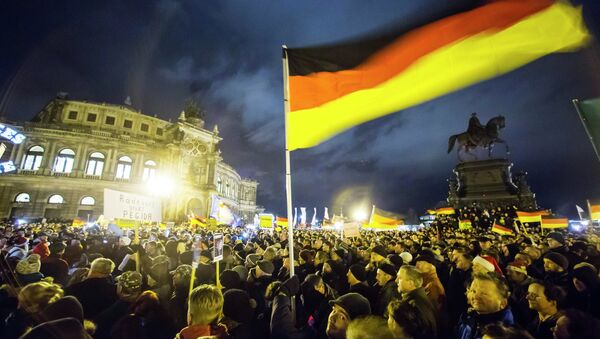 Pegida Plans to Hold Next Rally Despite Islamic Terrorist Threats
MOSCOW, January 19 (Sputnik) — The threat of terrorist attacks should not result in restrictions on freedom of expression and the right to hold demonstrations, German Justice Minister Heiko Maas said Monday.

"[The] terrorist threat should not lead to oppression of the freedom of expression, whether we like it or not," Maas was quoted as saying by the DPA news agency.

Commenting on the demonstrations staged by the anti-Islamization movement Pegida across Germany, Maas said that "as long as Pegida does not violate our laws, it is guaranteed the freedom of speech," as quoted by DPA.

On Sunday, Dresden police banned a Pegida (Patriotic Europeans Against the Islamization of the West) demonstration, planned for Monday, saying they had received information about a direct threat to Pegida members.

German Anti-Islamization Rally in Leipzig Postponed Until Wednesday
Later that day, Pegida informed its supporters that the 13th anti-Islamization march was canceled due to security concerns.

On Monday, however, the movement's spokesperson, Kathrin Oertel said the rallies would continue in Dresden, despite warnings of a terrorist threat.

Pegida stands for "Patriotic Europeans against the Islamization of the West". It has organized a number of protests in Germany against what it sees as the increased influence of Islam on Western culture.

Last Monday's Pegida rally attracted about 25,000 participants in Dresden, following a recent series of deadly attacks in France carried out by Islamist gunmen.