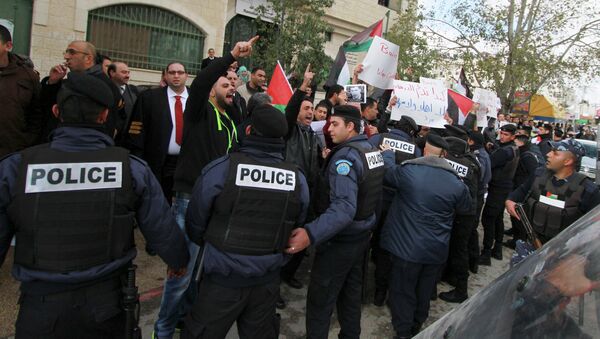 John Baird had just finished talks with his Palestinian counterpart Riyad Maliki at the Foreign Ministry building when a crowd of 100 Palestinians started hurling eggs and shoes at his motorcade. Despite the flaring tempers, Palestinian special forces refrained from any interference, Reuters notes.

The diplomat sustained no harm, but one egg smashed on his car roof.

The demonstrators shouted at the Canadian Foreign Minister and showed slogans reading "Baird you are not welcome in Palestine," the Haaretz says. Earlier, Palestinian Authority President Mahmoud Abbas’ Fatah party members demanded a boycott of the Canadian politician.

According to the statement issued by the Canadian Foreign Ministry after the talks, John Baird asked Riyad Maliki to abstain from any political moves that could endanger the Israeli-Palestinian settlement.

“I asked that the minister strongly reconsider the consequences of moving forward with any action that may be counterproductive to a negotiated solution with the State of Israel,” the statement reads.

US Vetoes Palestinian Statehood Resolution in UN Security Council
Demonstrators bashed John Baird for his condemning description of Palestine’s bid to join the International Criminal Court as a “concerning and dangerous development” in early January, according to The Ottawa Citizen.

Moreover, it was Canada, along with several other countries, that vetoed Palestine’s bid to obtain non-member status at the UN General Assembly back in 2012, Reuters recalls.

"Canadian Foreign Minister John Baird has contributed to Israeli violations of Palestinian inalienable rights, including our right to self-determination, by systematically lobbying against all Palestinian diplomatic initiatives," he said according to AFP.

John Baird arrived in the region to meet with both Israeli and Palestinian representatives during a five-day trip. After the negotiations with Palestinian Foreign Minister Riyad Mailki he moved on to hold talks with Israeli foreign policy chief Avigdor Lieberman and President Reuven Rivlin.

Trial of Palestinian Groups Attempt to Prevent ICC Membership, Envoy Says
The request to join the ICC was signed by Palestinian President Mahmoud Abbas on December 31, 2014 after UN Security Council failed to pass the resolution on the creation of an independent Palestinian state the day earlier.

The ICC bid was yet another attempt to continue to seek the adoption of Palestinian state resolution. Abbas also announced plans to use the ICC membership to sue Israeli politicians and military, who had occupied the Palestinian territory.