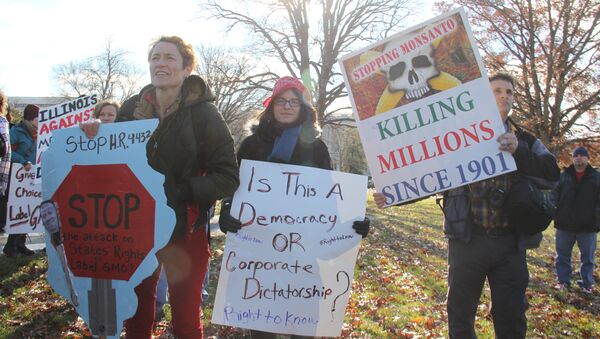 © Sputnik/Carmen Russell-Sluchansky
Subscribe
Is Frankenwheat coming soon to a table near you? Genetically engineered wheat is not approved yet for U.S. farming, but that bread you butter up in the mornings could be different if the agrichemical and agricultural biotech giant Monsanto has its way.

Anti-GMO Activist: No Fish DNA in My Tomatoes!
The St. Louis company is the leading producer of genetically engineered seeds, and it’s currently working on a new kind of wheat seed that’s resistant to herbicides.

Monsanto also happens to be the leading producer of the popular herbicide and weed killer known as Roundup, and therein lies the rub. About a decade ago, Monsanto said it developed a wheat strain using some of the same components from the weed killer, but wheat growers imagined that the headlines screaming “Give us our Daily Roundup” wouldn’t go over too well with consumers, so the whole thing was shelved.

But wheat growers have seen their share of the food table go down, especially compared to corn and soybean growers, and a new mindset came to be. Wheat growers associations recently surveyed their members about genetically modified wheat, and an overwhelming majority said yes, so “frankenwheat” was back on track and again in development.

Frankengrass Comes Alive: New GMO Crops Evade Federal Oversight
Convincing consumers is still an uphill battle, though, and it may well be related to the skittishness and “yuck factor” of eating bread made by the same seed used to kill weeds. Even though Monsanto maintains one has nothing to do with the other, it faces a big perception problem.

Last November, for instance, Monsanto agreed to settle a lawsuit filed by U.S. wheat farmers after a genetically modified strain developed by Monsanto was found in an Oregon field.

A government report found that it was an isolated incident, but it spooked plenty of people. Japan, South Korea and Taiwan decided to stop importing U.S. wheat, and American farmers were worried it would be a hit on their wallets and reputations.

No Thanks! Activists Hold "Eat-In" at Monsanto Headquarters
The $2.4 million settlement gives a little over $2 million to those farmers in Idaho, Oregon and Washington State who sold wheat between May and November of last year, while $250,000 goes to several wheat growers associations.

Monsanto said the settlement doesn’t mean they’re guilty of doing anything wrong, and that they just want to avoid a long legal battle.

That particular strain was never approved or marketed and there’s no clear explanation as to how it appeared, and Monsanto has suggested it was an act of sabotage. Japan, South Korea and Taiwan have since resumed U.S. wheat importations.