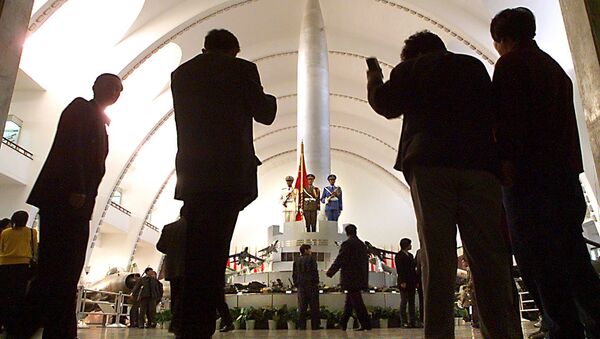 US, South Korea, Japan Agree to Share Data on North Korean Nuclear Weapons
MOSCOW, January 15 (Sputnik) – On January 15, 1955, the leaders of the People's Republic of China (PRC) decided to launch a national nuclear weapons program in response to US threats to conduct a nuclear strike against China.

Since the PRC was founded on October 1, 1949, the country's military and political leaders proceeded from the assumption that the country should possess armed forces equipped with modern weapons, including nuclear warheads.

In 1951, the Chinese government approved the first national civilian nuclear program. In the mid-1950s, the program was augmented by a secret clause aiming to develop nuclear weapons and delivery vehicles.

At the same time, China's military and political leaders became even more determined to develop their own nuclear weapons. On January 15, 1955, Mao Zedong chaired an extended meeting of the Secretariat of the CPC Central Committee and gave the order to develop a nuclear bomb with or without Soviet assistance. Several months earlier, Mao Zedong's deputy, Zhu De, and Defense Minister Peng Dehuai observed a Soviet military exercise involving nuclear weapons at the Totsky training center.

In April 1955, the USSR and the PRC signed their bilateral agreement on the development of nuclear energy and nuclear physics research. Several other bilateral agreements were signed between then and 1959 on cooperation in the development of the Chinese nuclear industry. Under an October 15, 1957 agreement, Moscow pledged to supply Beijing with nuclear weapons technologies. From early 1958, the first Soviet nuclear physicists started arriving in China. In 1950-1960, about 10,000 Soviet specialists, including nuclear weapons developers, visited China. With their assistance, the Lop Nur salt lake was selected as a future nuclear test site. Soviet specialists also helped build the first Chinese experimental heavy-water reactor and cyclotron, which commenced operations in late September 1958. The former was located at the China Atomic Energy Institute. Moreover, about 11,000 Chinese specialists and 1,000 scientists studied and were trained in the USSR.

Soviet-Chinese relations started deteriorating in the late 1950s. In June 1959, the Soviet leaders decided not to pass on technology for the nuclear bomb to their Chinese partners. In 1960, all Soviet specialists were recalled from China, but this decision could no longer seriously delay the Chinese nuclear weapons development program. By that time, China had already trained about 6,000 specialists with Soviet assistance. The Soviet side also provided China with some theoretical knowledge. In addition, Beijing received sufficiently detailed information from many European scientists and engineers who sympathized with China.

In 1960, the Beijing Nuclear Weapons Research Institute, the so-called Ninth Bureau, started designing a nuclear warhead. In 1962, Chinese leaders became concerned about delays with the nuclear program and decided to expedite construction of a nuclear weapons plant ("Base 20") in the province of Qinghai, so that the first nuclear bomb could be assembled as early as 1963. Uranium enrichment operations were launched at the Lanzhou Gaseous Diffusion Plant (Plant No. 504) in 1962. In 1964, the Jiuquan Atomic Energy Complex manufactured the required nuclear bomb components. In 1960-1964, Chinese physicists simulated over 1,000 nuclear explosions.

In the summer of 1964, the first three Chinese nuclear devices were delivered to the Lop Nur test site.

On October 16, 1964, China conducted its first nuclear test, detonating a 1,550-kilogram (3,417 pounds) warhead with a uranium-235 core on top of a test tower. The first Chinese nuclear device had a yield of 22 kilotons. According to Western experts, the PRC had spent an estimated $4.1 billion on its nuclear weapons program. The 1964 test made China the fifth nuclear power in the world. After conducting its first nuclear test, China pledged not to be the first to use nuclear weapons.

On May 14, 1965, the first Chinese nuclear bomb was dropped from an aircraft and detonated in midair. On June 17, 1967, China tested its first thermonuclear (hydrogen) bomb. On December 27, 1968, it tested its first thermonuclear device with a plutonium core. The first underground nuclear test was conducted on September 23, 1969. On October 16, 1980, China conducted the last atmospheric test, and all other nuclear warheads were subsequently detonated underground. The country conducted its last nuclear test on July 29, 1996.

In all, China detonated 47 nuclear devices, including 23 atmospheric tests (two ground bursts, one intermediate burst and 20 air bursts) and 24 underground explosions at the Lop Nur nuclear test site in northwestern China. Three nuclear warheads were detonated on top of test towers, with two towers standing 102 meters tall. The most powerful nuclear explosion had a yield of 120 kilotons.

On July 29, 1996, China declared a moratorium on all nuclear tests to come into effect from July 30, 1996. Beijing later signed the Comprehensive Nuclear-Test-Ban Treaty (CTBT) but has not ratified it to date.

In 2007, the Chinese government opened up its Lop Nur nuclear test site to tourists. The 1,100 square kilometer (425 square mile) facility was built in 1958 and functioned until 1987. In 1993, it was transferred to the government of the Xinjiang Uygur Autonomous Region.

The eight-room headquarters bunker is located 9.3 meters (30.5 feet) underground and is covered with reinforced concrete. Tourists can visit all of these rooms, including the research laboratory, the command center, the electric generator room and the communications center. The base also houses a museum featuring old telegraph equipment, telephones, other equipment, clothing and household utensils.

Chinese nuclear weapons and delivery vehicles remain a classified subject. China does not disclose any official information regarding its nuclear forces and their development programs.