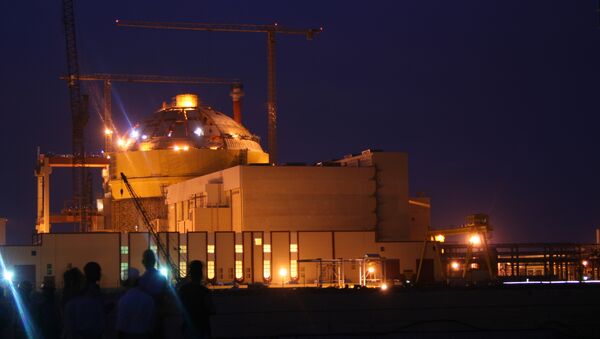 © Sputnik / Evgeniy Bezeka
Subscribe
According to the source first unit of India's Kudankulam Nuclear Power Plant was shut down when the emergency protection system was activated.

Russia, India Discuss Construction of Third, Fourth Units at Kudankulam NPP
NEW DELHI, January 15 (Sputnik) – The first unit of India's Kudankulam Nuclear Power Plant was shut down when the emergency protection system was activated; there is no threat to safety, a source in the Indian nuclear industry told RIA Novosti Thursday.

According to the source, the reactor equipment is in good condition and was working normally when the shutdown occurred. The quick activation of the system indicates the high reliability of the system. The source assured that the unit was equipped with the most advanced security measures and diagnostic systems.

"This event is not qualified as an accident. This is such an insignificant incident that it is not attributed to any level according to the IAEA International Nuclear Event Scale. It means that this event does not affect neither safety of the plant and its personnel, nor safety of the local population, environment and sea," Alexander Uvarov, an eminent Russian nuclear engineer told RIA Novosti Thursday.

Kundankulam power plant is being built in India's southern Tamil Nadu state with technical assistance from Russia, in accordance with the intergovernmental agreement made in 1988 and an addition to it made in 1988. Nuclear Power Corporation of India Ltd (NPCIL) contracted the project and operates the plant.