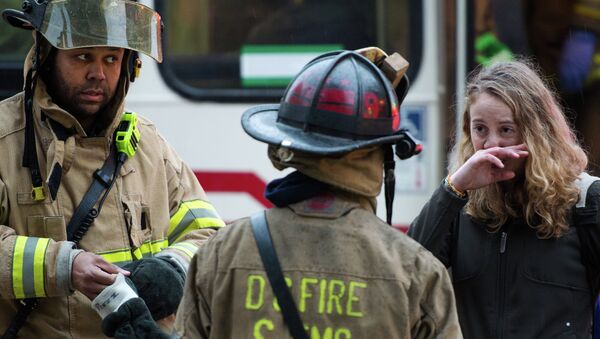 © AFP 2022 / PAUL J. RICHARDS
Subscribe
US Senator said in a press-release that the leadership of Washington, DC’s Metro transit authority needs to live up to past rhetoric and change its safety culture.

WASHINGTON, January 14 (Sputnik) – The leadership of Washington, DC’s Metro transit authority needs to live up to past rhetoric and change its safety culture, US Senator Ben Cardin said in a press-release on Wednesday, a day after a train malfunction killed one passenger and hospitalized more than 80 others.

Washington DC Metro Accident Probably Not Terror Attack: White House
“I will do what I can to hold them to their promises of reforming the safety culture at WMATA [Washington Metropolitan Area Transit Authority],” Senator Cardin said, citing similar post-disaster commitments that Metro’s leadership has made in recent years.

Cardin said he wanted “real answers” about the accident that would explain why passengers were held for such a seemingly long period of time on a “dangerous, smoke-filled train,” and whether the threat of similar incidents still exists.

“As passengers continue to put their faith in WMATA and ride Metro around the National Capital Region, we must give them reason to be confident that adequate resources are being dedicated to understanding what went wrong and how to prevent similar incidents from occurring in the future,” the Senator added.

On Monday afternoon, a Washington Metro Yellow Line train heading from DC to the Pentagon came to a halt inside a tunnel that filled with smoke. One person died during the incident, 84 were taken to the hospital.