Study: One in Three College Men Would Rape if They Could Get Away With It 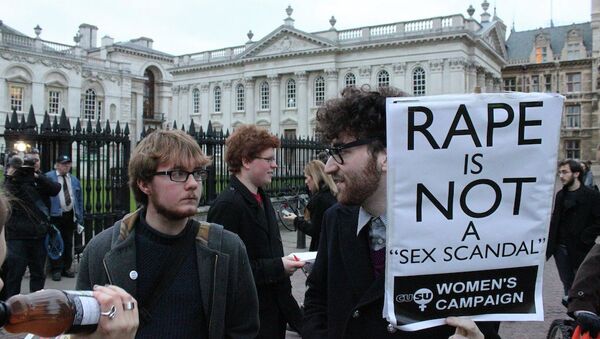 © Flickr / Devon Buchanan
Subscribe
A new University of North Dakota study highlights the difference of opinion among college men when it comes to the definition of rape. Nearly one in three college men surveyed admit they would rape a woman if they knew no one would find out.

While some men admitted that they would use force to obtain intercourse, they denied rape, according to the study. The numbers dropped significantly when the question was framed using the word “rape.”

The authors of the study say while federal data points to the rising number of college sexual assault cases many in the media and social network users have begun to question what constitutes rape. The confusion surrounding its definition led researchers to investigate whether there are underlying factors behind the respondents’ answers.

An estimated 31.7 % indicated that they would act on “intentions” to force a woman, if they knew they could get away with it. When the same question was phrased on “intentions to rape a woman,” the percentage was much lower with 13.6%.

“The No. 1 point is there are people that will say they would force a woman to have sex but would deny they would rape a woman,” Sarah R. Edwards, an assistant professor of counseling psychology at the University of North Dakota and the lead researcher for the study, told Newsweek.

The authors of the study also wanted to understand college men’s attitudes toward rape. Men who displayed more hostility toward women were more likely to admit their intentions to rape. While the men who rejected the term, but would still use force, did not display the same hostility.

“When you assess male college students, you will find some very, very troubling attitudes and beliefs,” Psychologist David Lisak told Newsweek. “Regardless of whether or not these contribute directly to sexual coercion…challenging them and addressing them and educating students about them is absolutely critical.”

Edwards notes that the study is preliminary and says she hopes to conduct more research on a larger scale.