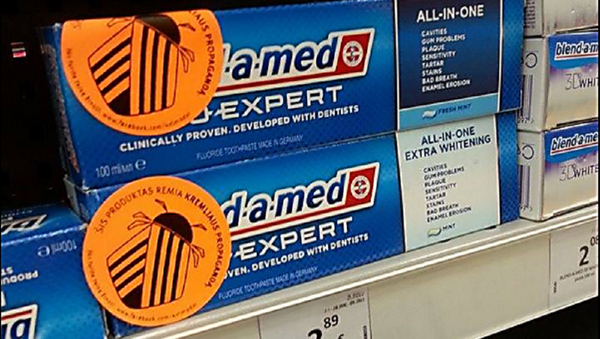 Lithuania has found an unusual way of fighting what it calls ‘Kremlin propaganda’: the Baltic state started labeling goods it believes are advertised on Russian TV with a Colorado potato bug.

MOSCOW, January 7 (Sputnik) – Lithuania has started marking some products that are sold in its supermarkets and believed to be advertised on Russian TV with a Colorado Potato Bug.

A video which was uploaded to the internet by Ukraine Today, Ukraine’s private international TV channel, shows a number of goods which feature the bug stickers.

Lithuanian activists believe that by “buying products advertised on Russian TV, consumers are funding Russian news stations, which are known to support Kremlin interests in the conflict in Eastern Ukraine,” says the correspondent.

The “invasive plant-eating bug” is orange and black and shares this color combination with the Ribbon of Saint George. Saint George is the patron saint of Moscow and orange and black ribbons are associated throughout Russia with the country's victory over Germany in 1945. These ribbons are often worn by pro-Russian fighters in eastern Ukraine, and Ukrainian nationalists use "Colorado" as a derogatory term to describe their former compatriots.

Ironically enough, most of the labelled goods do not come to Lithuania from Russia. They are either produced domestically, or come from its neighbors, such as Poland.

The manufacturers of the goods have not commented on the campaign yet.