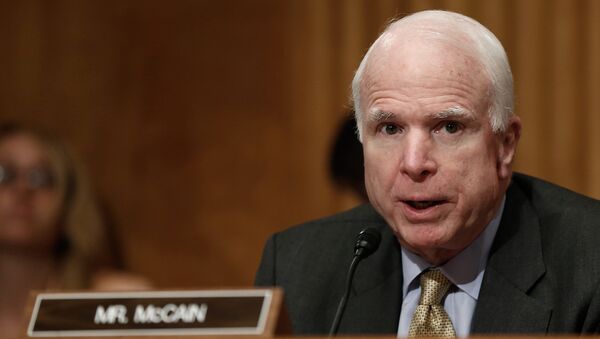 Syria has filed a complaint with the United Nations accusing US Senator McCain as well as other high-ranking US and French officials of illegally entering the country without visas, thus violating its sovereignty.

Stratfor: Ukraine Coup Plotted by US Over Russian Stance on Syria
MOSCOW, January 6 (Sputnik) — Syria has accused several senior US and French officials, including Senator John McCain, former French Foreign Minister Bernard Kouchner and former US diplomat Peter Galbraith, of entering the country without visas, thus violating its sovereignty, according to a Reuters report.

"Such actions are a blatant violation of Syria's sovereignty and of the resolutions of the Security Council concerning Syria," the agency quotes Syria's ambassador to UN Bashar Ja'afari as writing in a letter dated December 30, which Reuters received Monday.

Bashar Ja'afari also urged the UN Secretary General and its Security Council “to pressure governments to take the necessary measures against their nationals who enter Syrian territory illegally.”

Foreign Fighters Stream to Syria Despite US Campaign Against Islamic State
Although the Syrian envoy to UN mentioned “certain journalists and prominent figures” entering his country illegally, he was quick to single out Senator McCain for his trip in May 2013, former French Foreign Minister Bernard Kouchner – in November 2014, former US diplomat Peter Galbraith — in December 2014, and former Kuwaiti politician Walid al-Tabtaba'I — for entering Syria in September 2013.

At the time, McCain’s spokesperson confirmed that the former Republican presidential candidate visited Syria in May 2013 to meet with Syrian rebels.
McCain has already responded to the complaint with a statement on his official website:

Sad but unsurprising that Assad regime is less concerned w/ massacre of >200K than it is my visit w/ brave #Syrians: http://t.co/MgAhM1QHBZ

“It is a sad but unsurprising truth that the Assad regime is less concerned with its massacre of more than 200,000 men, women and children than it is my visit with those brave Syrians fighting for their freedom and dignity. The fact that the international community has done virtually nothing to bring down this terrible regime despite its atrocities is a stain on our collective moral conscience.”

Back in 2013 the US media, including CNN, confirmed that Senator John McCain visited rebels in Syria, making the Arizona Republican the highest ranking elected official from the US to visit the war-torn country.

McCain made the unannounced visit across the Turkey-Syria border with General Salim Idris, the then-leader of the Supreme Military Council of the Free Syrian Army. He stayed in the country for several hours before returning to Turkey.