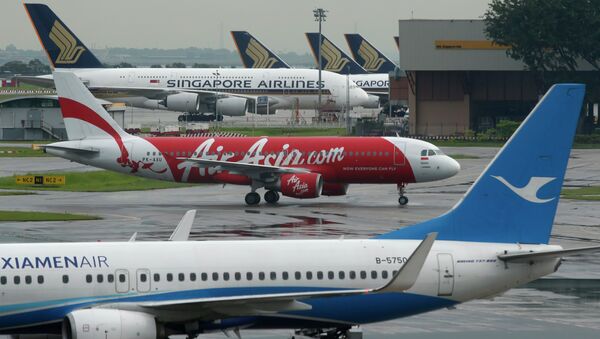 © REUTERS / Edgar Su
Subscribe
Australian Prime Minister Tony Abbott said that the disappearance of AirAsia QZ8501 is a tragedy, not a mystery or an atrocity.

Search for Missing AirAsia Plane Resumes, 162 Feared Dead
MOSCOW, December 29 (Sputnik) — The disappearance of AirAsia flight QZ8501 is a tragedy, but it is nothing like what happened to the ill-fated MH370 or MH17 flights, Australian Prime Minister Tony Abbott said Monday.

"This is not a mystery like the MH370 disappearance and it's not an atrocity like the MH17 shooting down," Abbott told Macquarie Radio.

In the interview, while talking about the AirAsia aircraft, which recently disappeared over the Java Sea, Abbott referred to the tragic circumstances surrounding two Malaysia Airlines aircraft.

Indonesia Verifies Reports on AirAsia Plane's Emergency Landing
Flight MH370 was traveling from Kuala Lumpur to Beijing when it went missing with 239 people on board on March 8. The search for the aircraft is still ongoing. Flight MH17 crashed on July 17 in Ukraine's war-torn Donetsk Region. According to the preliminary investigation report, the plane broke up in mid-air as a result of structural damage caused by a large number of high-energy objects that penetrated the aircraft from the outside.

According to Abbott, the AirAsia aircraft was "flying a regular route on a regular schedule," and most probably crashed due to bad weather.

According to the statement issued by AirAsia, the flight was en route from Indonesia to Singapore and lost contact with air traffic control at 7:24 a.m. local time (00:24 GMT) on Sunday. There were 162 people on board. The search operation is currently underway.