NATO Leaves Afghanistan…Or Does It? 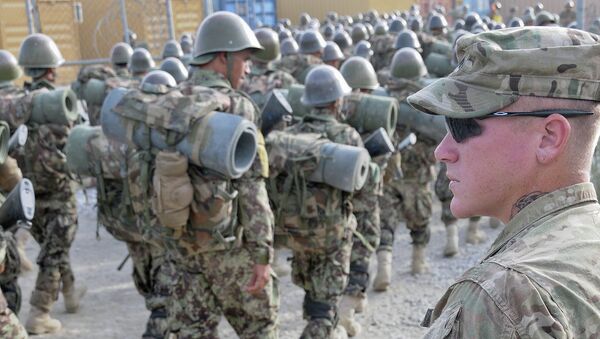 © Flickr / The U.S. Army
Subscribe
International
India
Africa
NATO has formally ended its combat 13-year-long combat mission in Afghanistan, but this doesn’t actually mean ‘no more boots on the ground’. As a matter of fact, nearly 12,000 soldiers will remain in country until at least 2016 in order to train security forces and fight terrorism.

The much-publicized withdraw is actually a drawdown, as NATO forces and responsibilities will be officially cut back in the country, not cut out of it as was misleadingly made to seem. Although the Afghans are now supposedly in charge of their own destiny, they still have the option, if mutually agreed upon, to work in coordination with the stay-behind forces to engage in combat operations and counter-terrorism missions. This effectively gives Kabul a crutch to lean on for when times get tough, meaning that at the end of the day, the government still depends on the US and NATO for its ultimate existence. Furthermore, when the Status of Forces Agreement between Afghanistan and the US is critically examined, it becomes clear that the US is still largely in charge of the country and nothing has really changed.

NATO has formally termed its stay-behind mission in Afghanistan as Operation Resolute Support, which will see the country divided into four primary zones of responsibility.

The selected ‘supervisory’ states are significant, since each has a certain value in the NATO’s overall mission. The US is of course the ringleader, calling all the shots, while Germany is the economic engine of the EU and its leading state. Having it on board and in a leadership role creates a strong demonstration effect for other, possibly more reluctant NATO states to step up their future commitment to the alliance. Italy, on the other hand, serves as the group’s Mediterranean springboard, which could see more action in the future if Libya continues its hellish descent or Algeria ruptures after the death of its aging president. Finally, Turkey is NATO’s frontline state in the Mideast and has lately played a major role in destabilizing Syria and promoting regime change there.

The US government can rest assured that it will still retain major privileges in Afghanistan during the ‘drawdown’, owing to the Status Of Forces Agreement (SOFA) signed between it and its Afghan counterparts in late September. Let’s take a look at some of its most striking provisions:

The US can no longer unilaterally engage in combat or counter-terrorist operations unless mutually agreed to by the Afghan forces, however, they’re free to engage in multispectral assistance in strengthening Kabul’s cadres. This basically means that the US military, besides being the behind-the-scenes architect of Afghan security, also functions as Afghanistan’s ‘911 emergency services’ for when the going, aka the Taliban, gets tough.

No Search and Seizure (Article 3):

The US  “shall not enter Afghan homes for the purpose of military operations and searches except under extraordinary circumstances involving the urgent risk to life and limb of U.S nationals”, nor can it “arrest or imprison Afghan nationals, nor maintain or operate detention facilities in Afghanistan.” Simply put, if something controversial is going to happen, America may watch and supervise, but it’ll let the Afghans get their hands dirty instead.

The Pentagon will continue subsidizing and supervising the Afghan military, with one of the final goals being that it “(achieves) standardization and interoperability with NATO.” Evidently, the US and its NATO pals plan on working together with the Afghan forces long into the future, as interoperability is a long-term goal meant for repeated future application, not just something to be achieved and applied solely in 2015-2016.

If Afghanistan experiences any external aggression (including that of “externally based or supported armed groups” [read: the Pakistani Taliban]), then the US will regard this as a “grave concern” and will take appropriate measures that are mutually agreed to with the Afghans. Basically, the US is the official guarantor of Afghanistan’s security, and the clause about “externally based” armed groups means that unless the terrorists in Pakistan are fully eradicated (which isn’t likely any time soon), then this could theoretically continue in perpetuity.

What’s Mine Is Not Yours (Article 8):

The American government and its associated contractors “retain title to all equipment, materiel, supplies, relocatable structures, and other movable property they have installed in, imported into, or acquired within the territory of Afghanistan.” This means that neither the Pentagon nor its private contractors are obliged to transfer or sell its “excess” items to the Afghans, although it should enter into consultations about this regardless. Afghan President Ghani was recently fuming about the US’ possible transfer of weapons and equipment to Ukraine from Afghanistan, but looking at the SOFA text that he himself signed, there’s actually nothing he can do about it.

“United States government aircraft, vessels and vehicles shall be free from boarding without the consent of United States forces authorities. [They] shall be free from inspection, regulation, or registration requirements”. To sum it up, the US military can do whatever it wants on Afghanistan’s roads, waterways, and airspace, and the ‘authorities’ can only sit by and watch.

The first chapter gives the US the “exclusive right to exercise jurisdiction over [its troops and contractors] in respect of any criminal or civil offenses committed in the territory of Afghanistan.” This is the same type of arrangement that existed in Iraq under the US military occupation and caused outrage when the 2007 Blackwater killings brought this to the spotlight.

“United States forces and United States contractors may import into, export out of, re-export out of and transport and use in Afghanistan any equipment, supplies, materiel, technology, training, or services”, provided that they’re for the US military and have the required documentation to verify this. Pretty much, the US can ship whatever it wants in and out of Afghanistan and use such things however it deems fit. Although there are provisions in there to supposedly prevent corruption and abuse, it’s doubtful they’ll fully succeed, because as the saying goes, ‘who’s watching the watchmen?’

The only thing that really changed in Afghanistan at the end of 2014 is that the foreign forces have become more ‘lean’ and efficient in accomplishing their objectives. Instead of going out in the line of fire themselves, they can now depend on their Afghan cannon fodder to do it for them, and ride in to save the day only when it’s “mutually agreed” and deemed in their overall interests. Afghan ‘empowerment’ is only an illusion to mask the fact that Kabul is now a ‘grown-up’ Western proxy, albeit one that can only partially fend for itself. The true power still rests in the palm of the Pentagon’s hand, as it has for the past 13 years and counting.