Three Reasons Behind the Ruble's Rebound: Will It Last? 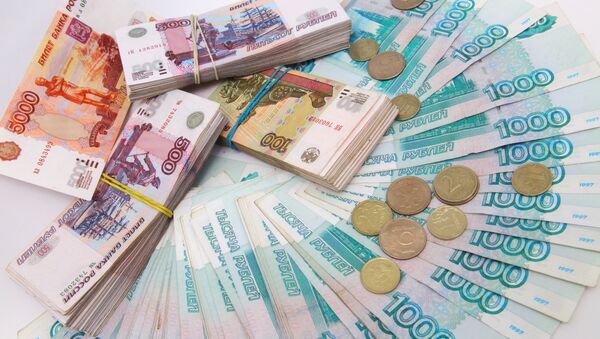 The Russian ruble has recently resurged 30% from its mid-December all-time low, but the outlook is still alarming and options are limited as cheaper oil and international sanctions weigh on Russia’s economy.

Russia
Sputnik Special Financial Analysis: Ruble, What Are You Doing? Please Stop!
MOSCOW, December 26 (Sputnik), Kristian Rouz — Russia’s national currency, the ruble, hit its three-week high yesterday, further strengthening during today’s trading, due to several factors, both fundamental and momentary ones. The principal driving force behind the ruble’s resurgence has been speculation over that the government’s decision to ‘advise’ exporters into selling part of their hard-currency revenues in order to hold down a looming financial crisis. The fact of the matter is that the current tax period has prompted large-scale sell-offs in dollars and euros by the nation’s leading exporters as they are paying taxes in rubles. The other two factors behind the ruble’s rebound are Central Bank of Russia (CBR) policy measures aimed at boosting commercial bank capitalization and mounting the sell-off of Russia’s FX reserves, which peaked at $15.7 bln sold in the week ending December 19.

The Russian ruble added 0.86% against the dollar to 52.1; however, trade volumes have been low, as most global markets close during Christmas holidays. The ruble also strengthened against the euro to 63.7.

The recent developments are perceived as optimistic in the market as the ruble depreciated dramatically earlier this month to an all-time low of 79.17 versus the dollar from a psychologically comfortable average of 30 rubles per 1 dollar throughout the last 15 years.

Russian Oligarchs Buy Up UK Homes as Ruble Slumps
The main fundamental reason behind the ruble’s partial resurgence has been the tax period, coming each month, when the nation’s exporters, generating most of Russia’s hard-currency income, have been selling dollars and euros and buying rubles as tax payments are ruble-denominated in Russia. However, this factor alone would not be sufficient to provide a sustainable recovery in the ruble’s FX rate. For instance, the ruble’s late-November highest point of 44.83 to the dollar came on November 24, but quickly slumped to 51.65 to the dollar on December 1, meaning the tax period provides only small volumes of hard currencies being sold on the domestic market, insufficient to shape the ruble’s FX rate. Fair enough: taxes are pretty low in Russia.

The markets have become more confident as the rumor spreads that Russian authorities have insisted exporters should sell more dollars and euros and buying more rubles than they need to pay taxes, salaries and cover other ruble-denominated expenses. This could be part of the Russian authorities’ plan to prevent a financial crisis caused by the lack of hard currencies on the domestic market, while many Russian companies have huge dollar-denominated foreign debts, amounting to over $678 bln total.

“Exporters are most likely selling their foreign-currency revenues following the government directive,” Sergey Vakhrameev of Moscow-based Ankor Invest told Bloomberg. “This is the key driver for the ruble’s gains.”

Russia
Putin Defends Central Bank Actions on Tumbling Ruble
The second factor causing the ruble’s resurgence is the CBR policy measure aimed at bank recapitalization, which will be the main determinant of the ruble’s fluctuation as long as international sanctions remain intact. The Bank of Russia is implementing its plan to provide dollar-denominated liquidity to companies that need it the most as sanctions have largely cut them off from international lenders. All in all, the CBR is intending to lend up to $19 bln to commercial banks in order to prevent a full-scale financial crisis. Next year, Russia’s private sector has to pay off some $120 bln of external debts, and the CBR said yesterday it will provide further dollar- and euro-denominated loans to companies in need.

The measure, the CBR said, would allow Russian companies “manage their own currency liquidity and also refinance Russian exporters’ external foreign currency debts payable in the near future, in conditions of limited access to international capital markets.”

As the CBR provides more hard-currency liquidity on the domestic market, while simultaneously sucking up excess ruble liquidity by having raised its interest rate to 17%, the ruble strengthens. However, the effects of these policy measures are fragile.

The third factor, supporting the ruble, is the ongoing massive sell-off of Russia’s FX reserves on the domestic market. Between December 12 and 19, the CBR lost $15.7 bln of its FX reserves, some of which were sold in order to support the ruble, the rest being lent to banks and other enterprises. The total value of Russia’s FX reserves diminished from $414.6 bln on December 12 to $398.9 bln on December 19. According to CBR data, the regulator spent $4.8 bln on FX interventions and provided $9.8 bln in repo deals aimed at boosting hard currency liquidity within Russia.

Asia-Pacific Stocks Up on Financial Sector Gains, Oil Back to $60/bbl
In such circumstances, Russia’s ruble remains fundamentally weak as its FX rate is supported via non-market regulative tools and policy measures. Russia’s national currency is lacking sustainability due to the negative effects of the international sanctions, cheaper oil and the excessive dollar- and euro-denominated indebtedness of the private sector. Russia’s authorities have said the reason behind the recent dramatic decline in the ruble’s FX rate was sheer currency speculation; however, in fact, FX speculators only added to the massive sell-off of rubles earlier this month. Short-to-mid-term risks for the ruble remain, determined by the shortage of hard-currency liquidity into Russia. The struggling nation might opt, however, to either impose limitations or direct control of capital flows, thus triggering immediate financial isolation. Another option could be the re-monetization of gold in an attempt to get rid of the dollar. Despite being a solid way of further development, the gold standard would, however, invoke all its well-known shortcomings, including the severe limitation on economic growth, higher short-term volatility, a threat of deflation and lack of flexibility in monetary policies during crises.
Newsfeed
0
Access to the chat has been blocked for violating the rules . You will be able to participate again through:∞. If you do not agree with the blocking, please use the feedback form
The discussion is closed. You can participate in the discussion within 24 hours after the publication of the article.
To participate in the discussion
log in or register
loader
Chats
Заголовок открываемого материала