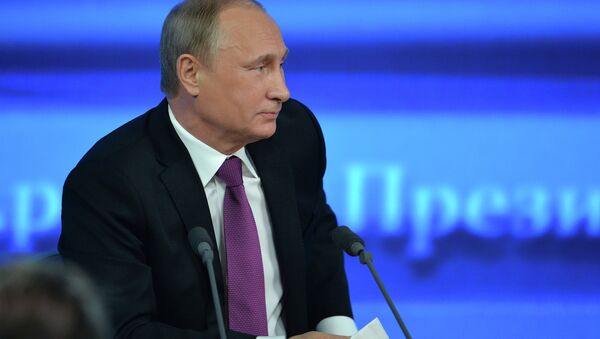 Russian President Putin commented on the current state of Russian economy, the recent measures taken by the Russia's Central Bank and the ruble rate during his annual news conference.

Medvedev: Ruble Undervalued, Harsh Financial Regulations Unnecessary
MOSCOW, December 18 (Sputnik) — Russian President Vladimir Putin predicted Thursday that the economy may rebound from the current downturn as early as the first quarter of 2015, with a federal budget surplus in 2014 expected to amount to 1.9 percent of GDP.

“The federal budget this year will have a surplus, that is income will be above our expenses by 1.2 trillion rubles, that’s about 1.9% of the GDP,” Putin said during his major end-of-year press conference.

Russia’s budget was previously expected to have a surplus of only 0.4 percent of GDP. Economic recovery was still within sight and a rebound is expected by the end of the next year, the president assured the nation. This echoed Putin’s previous calls for the nation to tighten their belts.

Russian Economy to Rebound in 2015 if Ukraine Crisis De-Escalates:Saxo Bank
“I said that even given the most unfavorable internal market condition, this situation may last for about two years … But the situation may start improving even earlier … in the first, second quarter, in mid-2015 or at the end of the next year. No one can say for sure,” he said.

His statements come after the ruble slid to a record-low of 80 to the dollar and 100 to the euro Tuesday, prompting the Central Bank to take urgent measures to stem its depreciation and stabilize the currency. By Tuesday evening ruble rebounded against the dollar. On Wednesday, one dollar bought 59.6 rubles.

The president said the ruble had been weighed down by a series of “external factors,” namely a drop in oil prices and, to a lesser degree, by a slide in gas prices. Russia's economy is heavily dependent on energy prices and the global oil trade.

Rate Hike by Russia’s Central Bank May Deepen Recession in 2015
Putin conceded that the Russian government could not explain what caused the oil prices to tumble, adding it was difficult to predict their dynamics. Crude traded for as low as $54 per barrel early on Wednesday, its lowest price since May 2009.

“If the situation takes a negative turn, then we will have to introduce some amendments to our plans. Naturally, something will have to be trimmed. However, I would like to stress that a ‘positive rebound,’ as experts call it, and subsequent growth are inevitable under present circumstances,” the Russian leader told reporters.

The president defended a series of measures adopted by the Central Bank to save the national currency after it began depreciating. It raised interest rates from 9.5 to 10.5 percent, and then to a whopping 17 percent over the span of a few days, but failed to stem the ruble's slump against the dollar. The hike was its largest single increase since the 1998 economic crisis.

Bank Support Vital in Hard Times: Russian Economic Development Minister
As a result, the Russian Finance Ministry announced Wednesday it was going to intervene in the market, saying the currency was undervalued. It also decided to dig deeper into Russia’s Reserve Fund safety net. Russian Prime Minister Dmitry Medvedev said earlier the government was not yet going to impose “extremely harsh” capital controls and voiced his trust in a free market.

Putin claimed that the government’s and Central Bank’s measures were justified, despite concerns that the country’s banking authorities had put too much faith in the market’s self-regulating capabilities.

“There are some questions to the government and the Central Bank about the time line and quality of the measures taken, but, in general, their actions were adequate and were made in the right direction,” the president said during a press conference.

Ruble's Impact on European Economy to Be Discussed at EU Summit: Source
The Russian leader urged the Central Bank and the government to cooperate to help the national economy get back on its feet, but warned against interfering in each other’s functions.

Putin also backed the Bank of Russia’s decision to hike key interest rates, saying this was done to “secure macro-economic stability.” He pointed out that the bank was not “solely responsible” for the economic downturn, but called for “personal responsibility” to be taken by officials who made decisions in the past few weeks.

This came after Putin joked earlier in the conference that jailing Central Bank head Elvira Nabiullina would not rescue the ruble, referring to accusations against the banking chief who had allegedly mishandled the ailing currency.

Wrapping up the conference, Putin pledged to “work rigorously for the interests of the citizens” and take responsibility for whatever happens to the country and its economy. “Responsibility for everything always lies on the head of the state,” Putin said, adding he never “ducked and don't plan to duck” his duties.