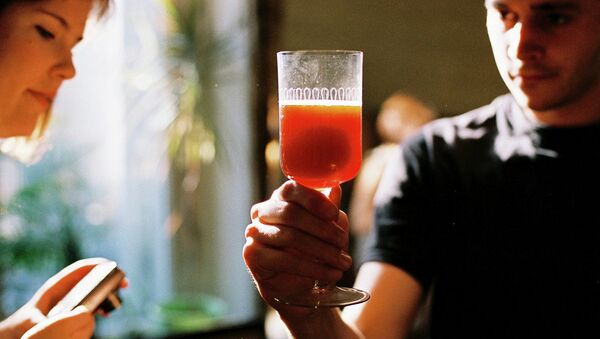 Vladimir Mamatov, a Reporter journalist from Russia's city of Kirov (former Vyatka) suddenly stepped forward while the President was expecting the question from the Turkish reporter.

Highlights of Putin's Big Annual Press Conference 2014
However, the journalist did not seem embarrassed and asked the President about Russian traditional soft drink, bemoaning the fact that although the drink is not inferior in quality to famous Coca-Cola and Pepsi-Cola, trade networks in Kirov denies to promote and sell "Vyatski Kvas." Since Mamatov was speaking very slowly, the audience and the President suspected that the man was slightly drunk.

"I feel you had a bit of kvas yourself in the morning," Vladimir Putin joked, as cited by RT, apparently referring to the fact that brewed kvas contains small amount of alcohol.

However, Vladimir Putin emphasized that the issue, raised by the journalist, was a burning one and Russian manufacturers must be supported by the state.

The kvas question has immediately gone viral in the social media. Users were sharing opinions on the funny case with the "drunk journalist" during the Q&A nationwide session and discussing the competitive advantages of kvas. It turned out later that Mamatov was a stroke survivor, therefore the man was speaking in an odd way.

After today's #kvas question to #Putin from stroke survivor, #Auchan decides to give it a go http://t.co/DA24Rltjj2 pic.twitter.com/dmqcNpdire

After #PutinPresser #Kvas sales will go through the roof.

Curiously, the surprising question made by Kirov's journalist has become a sort of witty "advertising" of the product. Achuan, one of Russia's leading store chain announced it would consider "Vyatski Kvas," Izvestia reported. Ruslan Vladimirov, the CEO of Vyatich LLC,  "Vyatski Kvas" maker, said that he had already received numerous proposals for cooperation.

Kvas, the famous Russian drink, is traditionally made of rye bread, flavored with fruits, raisins and strawberries, as well as different herbs. It is especially popular in summer, when used to prepare a cold soup named "okroshka." World-known Russian poets and writers, such as Alexander Pushkin, Nikolai Gogol, Lev Tolstoy and Anton Chekhov, mentioned kvas in their immortal literary works.

"Have you, gentlemen ever had pear kvas flavored with sloes, or vodka with raisins and plums?" wrote Nikolai Gogol in his famous "Evenings on a Farm Near Dikanka."