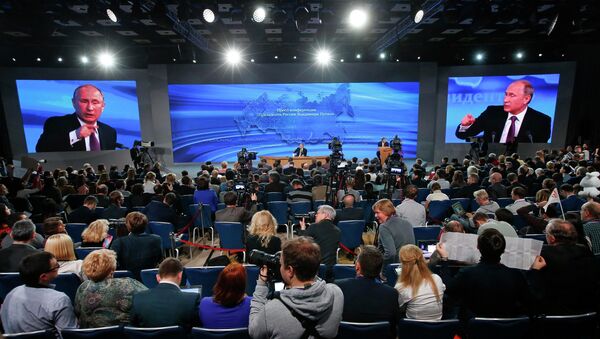 The economic blockade of Ukraine's eastern regions is an absolutely futile and counterproductive path for the country's statehood.

Putin believes Ukrainian President Petro Poroshenko is willing to restore peace in his country, but a numer of other senior officials oppose the idea. “Naturally, the president of Ukraine wants to settle [the crisis], I have no doubts of his determination to do that. But he is not the only one [political force] there," Putin told reporters.

Putin: People of East Ukraine Should Be Allowed to Decide Their Own Future
The planned "all-for-all" prisoner swap between the Ukrainian government in Kiev and eastern Ukraine was broken by Kiev. "Yesterday there was an agreement on swapping 30 individuals. Representatives from the militia went to the swapping area and an official representative from Kiev showed up and said: "No, we're not going to swap until the next meeting in Minsk," Putin said.

Putin said the appropriate path to settling the Ukrainian crisis was to stop building walls and start building a common humanitarian space.

Putin said Russia's position regarding the Ukrainian crisis was right, while the Western position was wrong. The West has accused Moscow of meddling in Ukraine's internal affairs after the government coup in Kiev. A number of countries have imposed several rounds of economic sanctions on Russia. Moscow has repeatedly denied any involvement in Ukraine’s internal affairs and underlined the importance of allowing Donbas residents to be heard, calling on Kiev to establish political dialogue with the breakaway regions.

Putin: Central Bank Key Rate Increased to Sustain Macro-Economic Stability
The current downturn in the Russian economy is provoked by external factors, mainly the slump in global oil prices. Russia's budget, which is largely dependent on energy exports, is currently suffering from the sharp decline in oil prices. The Russian economy is now facing a backlash from Western sanctions that were imposed on Moscow due to its alleged involvement in the Ukrainian crisis, although Moscow has repeatedly denied such claims.

The Russian economic recovery will take two years at worst. “If the situation takes a negative turn, then we will have to introduce some amendments to our plans. Naturally, something will have to be trimmed. However, I would like to stress that a “positive rebound,” as experts call it, and subsequent growth are inevitable under present circumstances,” the Russian leader told reporters.

On the Ruble and Central Bank:

Putin expressed hope that the ruble would continue to strengthen again foreign currencies. The Russian authorities are planning a series of measures that proved successful back in 2008.

Putin Hopes Ruble to Keep Strengthening
Putin also urged the Central Bank to act faster in order to overcome the current economic slowdown. “Their actions need to be coordinated, collective and prudent, but without interference into the Central Bank or the government’s sphere of competence. Nevertheless, there must be coordination and it must be timely,” Putin said.

Russia’s Central Bank needs to hike key rates in order to stabilize the country’s macroeconomy. In an effort to halt the devaluation of the national currency the Russian Central Bank on Monday raised its key interest rate from 10.5 percent to 17 percent.

Relations With the West:

US Plans to Deploy 150 Tanks in Eastern Europe
Putin thinks the West considers itself an empire and sees other regions as its vassals, who must be oppressed. "They [the West] will always try to chain the bear", said Putin.

Putin said Russia was not attacking the West politically, but only protecting its own national interests. "The problem of modern international relations," he believes, "is that our [Russia's] partners refuse to stop; they think they have won."

On Issues of Gas:

Putin: Russia Is Europe’s Only Reliable Supplier of Cheap Gas
The contract for the delivery of Russian gas to China is not detrimental for any side, even despite mutual discounts, Putin said. The president did not specify the details of the discounts, but stressed that the project turned out to be "undoubtedly profitable" for both Beijing and Moscow.

Putin said there was a possibility of creating a European gas hub on the Turkey-Greece border and it would depend on the European Union’s will. Russia is ready to work in this direction.

President Putin stressed that Russia is the only reliable gas supplier to Europe.

Although relatives of terrorists could be aware of their plans, this does not give anyone, including the Chechen leader Ramzan Kadyrov, the right for extrajudicial executions. Everyone living in Russia must comply with the existing laws and nobody should be considered guilty, unless the court rules so, Putin said.

According to Putin, the Russian government does not repress people who are against its policies. “I would like to assure you that there is no organization or any sort of repression against people who don’t agree with our actions, for example in Ukraine, Crimea, or any other external issues, no one from  official government organs do this,” Putin said.

On Military Budget and External Threats:

Putin: Russia's Defense Ministry Budget to Grow to $50 Billion in 2015
Russia has only two military bases abroad, in Tajikistan and Kyrgyzstan.

Russia is worried about Washington's plans to install an Aegis Ashore ballistic missile defense complex in Romania by 2015, and a similar system in Poland by 2018. Putin urged the international community to address this issue.

On His Private Life:

Putin assured that his private life was fine. "Everything is fine, don’t worry," Putin said. In 2013, Putin and his wife Lyudmila announced a decision to terminate their marriage, attributing the outcome to the pressure created by constant public attention.

Khodorkovsky, who was arrested on October 25, 2003, spent ten years in prison for fraud and tax evasion until he was pardoned this year. The former energy magnate has since relaunched his "Open Russia" foundation to push for political reforms in Russia.

Russia is ready to further liberalize its market for Georgian goods, Putin said.

According to Putin, Iranian leaders are demonstrating considerable flexibility and the issue with the country's nuclear development will soon be settled.

On Possibility of Next Presidential Term:

Putin said it was too early for him to decide whether to run for another term in office. Putin also mentioned he took full responsibility for everything that was happening in the country.