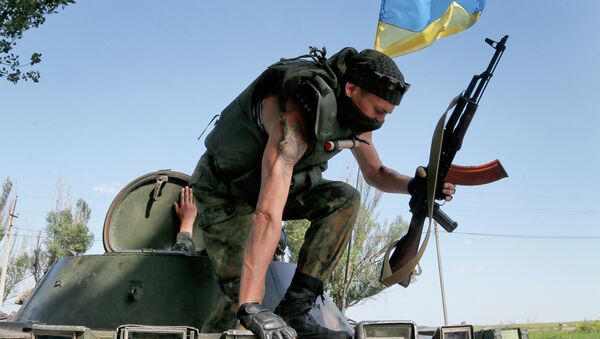 © AP Photo / Efrem Lukatsky
Subscribe
Daniel Zubov
All materialsWrite to the author
In one of the final votes of the year and without general debate, both Houses of Congress passed the “Ukraine Freedom Support Act of 2014.” The legislation is part of a larger effort by the American foreign policy apparatus to dictate policy in Ukraine.

What is Ukraine Freedom Act, and What Does It Imply?
WASHINGTON, December 19 (Sputnik) — This week, US President Barack Obama signed the “Ukraine Freedom Support Act of 2014.” “Lethal” American military aid to Ukraine is the current stage of the ongoing trade war. The modern dispute began with Yanukovych’s decision to forego signing the EU trade agreement, and has escalated into a civil war in Donbas.

On January 15, 2014, the Senate Foreign Relations Committee hosted a hearing on the “Implications of the Crisis in the Ukraine.” The groundwork for the legislation began with testimony from Assistant Secretary of State for European and Eurasian Affairs Victoria Nuland, Deputy Assistant Secretary of State for Democracy Human Rights, and Labor, Thomas Melia, and former National Security Advisor Zbigniew Brzezinski.

'Ukraine Freedom Support Act' Advocates War, Not Freedom
Less than a month after Ms. Nuland testified that the United States would “not support any specific candidates or parties,” a leaked phone call with Ambassador Pyatt proved the opposite true. In addition to declaring her support for Yatsenyuk, Nuland ended the call by noting the willingness of Vice President Biden to go through with the operation.

The Maidan coup occurred two weeks after the recording was leaked.

Vice President Biden did not visit Ukraine until November. He was accompanied by Ms. Nuland. During the visit, the two received an official request from the Ukrainian military for lethal aid. It is unknown how much influence Ms. Nuland had in the preparation of the request.

Lavrov: Ukraine Freedom Act to Undermine US-Russia Relations for Long Time
Biden’s influence in Ukraine was felt in May, when it was revealed that his son, Hunter Biden, joined the board of a Ukrainian gas and oil company. The holding company, Burisma, is run by Ihor Kolomoisky, the oligarch who was appointed governor of the gas-rich Dnipropetrovsk region.

Burisma is registered and Cyprus, meaning that they could have faced high tariffs if they controlled a Ukrainian company which is extracting and exporting resources from Ukraine to Europe.

Thankfully, the EU Association Agreement passed by the Yatsenyuk government would remove these tariffs, allowing profits from the oil fields to flow into the bank accounts of Kolomoisky, Biden, and others, rather than the people of Ukraine.

Ukraine Freedom Support Act Authorizes Economic Confrontation With Russia
The unpopularity of fracking is matched by the general unpopularity of the austerity agenda which Yatsenyuk was tasked with implementing.
Anti-austerity protestors in Greece, Belgium, and France (among others) are showing the beginnings of a movement against this economic exploitation. Economic tension exacerbates ethnic tensions.

These tensions have led to the deaths of over 4,000 Ukrainians this year, a number which will hopefully grow at a slower rate if a cease fire holds.
But rather than continue on a path that could result in the rebuilding of Donbas and stabilization of economic and military relations between Ukraine and her neighbors to the east and west, the American government will send more weapons.

Senator Corker, who is set to Chair the Foreign Relations Committee in the next Congress, trumpeted passage of the Ukraine Freedom Support Act by declaring that despite turning Ukraine into a military dependent, the legislation supports a “a firm commitment to Ukrainian sovereignty.”

Russia Reserves Adequate Response to Ukraine Freedom Support Act: Official
The legislation authorizes $350 million to be provided over three years for “increased military support for the Government of Ukraine” and  was hailed by State Department spokeswoman Jennifer Psaki as part of the American government’s pursuit of a “diplomatic solution.”

Despite those assurances, former-Congressman Dennis Kucinich suggested the legislation would “reignite the Cold War.” He warns that “under the guise of democratizing, the West stripped Ukraine of its sovereignty with a U.S.-backed coup, employed it as a foil to advance NATO to the Russian border and reignited the Cold War, complete with another nuclear showdown.”

It is yet to be seen how Secretary Kerry will use these new sanctions during his meetings with Lavrov, but it is clear that if a diplomatic solution moves forward, it will be despite the best efforts of the American government to escalate and prolong the conflict.