Gorbachev: US Needs to Have Enemy to Return to Policy of Pressure 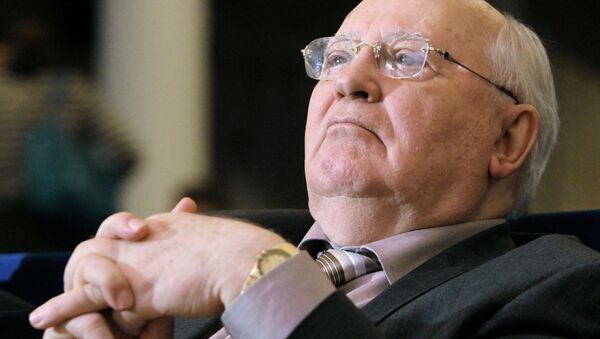 © Sputnik / Andrei Rudakov
/
Go to the photo bank
Subscribe
The last Soviet leader, Mikhail Gorbachev, voiced his opinion on US desire to 'run the world show,' OSCE's failure to provide security and his main political achievement. He also stressed that Washington compelled Europe to impose sanctions against Russia.

Gorbachev, speaking about his attitude to US policies and the current situation in the world, noted that the United States has certain rights to make decisions in the interest of the whole world, but if the country wants to be a leader, it should not be the only one.

"The Americans suddenly began to assert themselves… And the most extreme, so to say, thing is that they started to offer creation of a new super-empire… America wants to run the world show," Gorbachev told RT.

The last leader of the Soviet Union added the United States need to have an enemy to return to the policy of pressure and command. Gorbachev also explained expansion of NATO to the east by its political and military culture.

He also said that NATO is seeking to reach Russia's borders, and while watching this, Russia sometimes makes unnecessary steps. The ex-president stressed that Russia and the United States can negotiate when there is trust.

"We had the trust… And then there's this empire. The Americans lost. Any attempts to create a one-sided, unipolar world — are nonsense," Gorbachev said.

Geopolitical tensions between Russia and the United States intensified after Crimea’s referendum to join Russia. Accusing Moscow of meddling in Ukraine’s internal affairs, the United States, along with several other countries, imposed several rounds of sanctions against Russia, targeting its energy, defense and banking industries. Moscow has denied the claims, saying that the restrictive measures are counterproductive.

Gorbachev Says United States Needs Perestroika
Germany and the other European Union member states introduce sanctions against Russia at their own expense due to their strong dependence on the United States, the last leader of the Soviet Union said.

“This is all because Merkel is currently in a difficult situation due to Germany’s strong dependence on the United States. Germany can deal with all the other Europeans,” Gorbachev said.

According to Gorbachev, in Germany many believe that Berlin “should by no means behave in a way that could jeopardize its relations with Russia.”

Gorbachev added that the former Chancellor of Germany Helmut Kohl agreed with him over the fact that without Russia there can be no world order that would satisfy the interests of every nation. But, according to Gorbachev, Russia’s hypothetical presence in the European Union is disadvantageous for Germany, as without Moscow Berlin has a very significant role in the EU. And Russia, no matter where it comes “will claim its sovereign, serious positions and have enough arguments [to support these claims],” Gorbachev concluded.

Following the United States’ lead, the EU countries, including Germany, have imposed several rounds of sanctions against Russia. Germany’s actions over Russia have been criticized by a number of German politicians, businessmen and public figures. However, Merkel said late November that the sanctions would not be lifted until the Ukrainian crisis was resolved.

OSCE Not Useless, but Failing to Fulfill Some of Security Control Functions

Gorbachev: Discussions Over Strategy on Global Stabilization ‘Underway’
Mikhail Gorbachev claimed that although the Organization for Security and Co-operation in Europe (OSCE) is not a "useless" structure, it fails to fulfill the security control functions it was designed to fulfill.

"I would not say [that the OSCE is] 'useless'," Gorbachev said, noting that OSCE observers are currently "quite active" in Ukraine. "But we [the Soviet Union] together with the Americans and Europeans [when creating the OSCE] were talking about different kind of security – [the security for the countries] from Brest to Vancouver. And we meant for it [the security] to encompass European countries plus Canada and America."

Gorbachev said that OSCE should be given the significant powers "so it could stop anyone and intervene at any stage in a process that is becoming dangerous."

Gorbachev stressed that where there is nuclear weaponry, international control and responsibility should be very high. "We need to get back to that. We need to build a United Europe, a European House. And now we are in the European House and we are being picked at," Gorbachev said.

Having its roots in the 1973 Conference on Security and Co-operation in Europe (CSCE), the OSCE is the world's largest security-oriented intergovernmental organization. The OSCE addresses a wide range of concerns, including arms control, counter-terrorism activities and human rights protection.

Gorbachev Considers Perestroika His Main Achievement, Regrets It Was Not Completed

Gorbachev: Russia, Europe to Lose Out if There is No Compromise on Ukraine
Mikhail Gorbachev considers the Perestroika reforms to be one of his greatest achievements and regrets that they were never completed.

"Perestroika…Freedom, openness, freedom to travel abroad, freedom of religion…and, finally, disarmament. People breathe a sigh of relief," Gorbachev said, answering a question about what he considered to be the main achievements of his political career.

He added that other important achievements included German unification in 1990 and the restoration of relations with China.

At the same time, the former Soviet leader expressed regret that Perestroika was never finished.

"I feel sorry that it was not possible to complete this project. We must, so to speak, go back and start again from those positions. Negotiate and move forward. But we all have to participate in it. I suggest that it is necessary to create structures, institutions which would be in the hands of people," Gorbachev elaborated.

Perestroika, which literally translates as "restructuring", was a political movement within the Communist party of the USSR initiated by Gorbachev during the late 1980s aiming to restructure the Soviet economy and its politics.