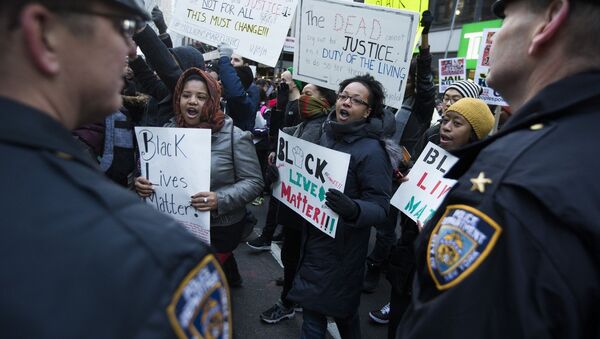 A row of New York policemen wearing faceguards prevented protesters from mounting the steps at the city police headquarters, as the anti-police brutality rally came to an end.

NEW YORK, December 14 (Sputnik) – About 10 policemen standing shoulder to shoulder blocked the way across the top of the steps that protesters were trying to mount, chanting "Shame on You!". Police did not use force, no arrests were made.

The crowd had slimmed down to a few hundred at the headquarters as many protesters were heading home. Tens of thousands of people had gathered for the protest action, dubbed the "Day of Anger" on Saturday.

The protest was triggered by the death of Eric Garner, a 43-year-old asthmatic street peddler selling untaxed cigarettes, who died from suffocation after being put in a chokehold by white police officer Daniel Pantaleo in New York City on July 19. A grand jury decided not to indict Pantaleo earlier this month.

The decision came after a Missouri grand jury announced on November 24 that it would not bring charges against Darren Wilson, a white police officer who shot and killed unarmed African-American teenager Michael Brown in Ferguson on August 9.

The killings of unarmed African-Americans by white police officers have led to a massive public outcry and waves of nation-wide protests over racial inequality in the United States.