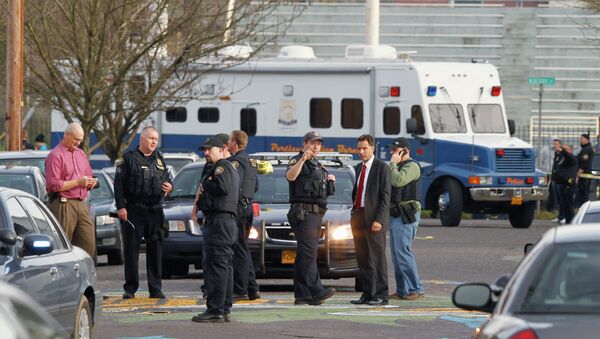 © REUTERS / Steve Dipaola
Subscribe
The Portland police announced that three people have been taken to an area hospital after being shot outside Rosemary Anderson High School (RAHS), a fourth injured after having been grazed by a bullet.

"The three teenage victims, two males and one female, ran to the high school, following the shooting," the Portland police said in a statement Friday, adding that the victims have been taken to an area hospital.

"They were conscious and awake at that time," the police said. A fourth person was also said to have been injured after having been grazed in the foot by a bullet, the Oregonian explained.

The Oregonian noted that 16-year-old Taylor Michelle Zimmers was in critical condition after having been shot in the chest. The condition of 17-year-old Labraye Quavon Franklin and 20-year-old David Jackson-Liday was upgraded from serious to fair Friday night. 19-year-old Olyvia Batson, who had been grazed in the foot by a bullet, was treated at the scene.

Earlier reports said that at least two people had fallen victim to the shooting and that RAHS was on lockdown as police searched for suspects, who were reported to have fled the scene.

Two other nearby schools, Jefferson High School and Portland Community College Cascade campus, were reported to have been put on lockdown following news of the shooting, Portland's KPTV reported. The area is now safe, according to Portland police, and an investigation is underway.

The shooting is said to have taken place outside the school on Killingsworth Court. The Oregonian explained that three shots were fired shortly into lunch hour, and that the victims may have been standing on the corner outside the school before being shot by a gunman in his late teens or early 20s. The gunman is said to have fled the scene on foot, possibly along with two other men.

Police spokesman Seargant Pete Simpson noted that it was unknown whether the dispute was gang-related, and whether or not the victims were the shooter's intended targets. Police said that they have been provided with good descriptions of the suspect. No arrests have yet been made.

RAHS is a community-based alternative school, which enrolls up to 190 at-risk students annually, who have either been expelled or dropped out of other public high schools, according to the RAHS website. Many of the students are homeless, and the school gives them a "last chance" to complete their education.