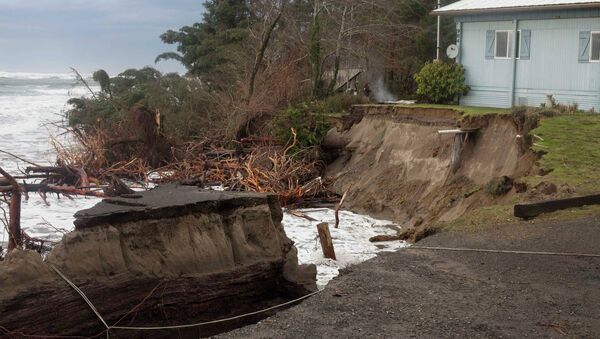 MOSCOW, December 12 (Sputnik) - The death toll from a powerful tropical storm, ravaging California, has climbed to three on Friday, as the heavy rains continue to make their way along the west coast of the United States, the local KTLA TV reported.

On Thursday, the police of Portland, Oregon said that a teenage boy died after a tree fell on the vehicle he was in, causing its driver to hit another tree. The woman driving the car was hospitalized with life threatening injuries. The same day in South Oregon a homeless man Philip Crosby died after a tree fell atop his tent. His 18-year-old son was also injured.

According to NBC Los Angeles, the local firefighters are currently trying to rescue two people who reportedly were clinging to trees in the swollen Los Angeles river.

"A Los Angeles Fire Department diver jumped into the swollen river and the department deployed a helicopter for the search," NBC said on its official website.

The storm, dubbed the Pineapple Express, reached California Thursday, causing the cancellation of more than 200 flights and leaving some 150,000 people without power. According to the local media, earlier on Friday mandatory evacuation was ordered in Camarillo Springs, Ventura county where at least 12 homes were damaged or destroyed by mud flows. Part of Pacific Coast Highway was also closed.