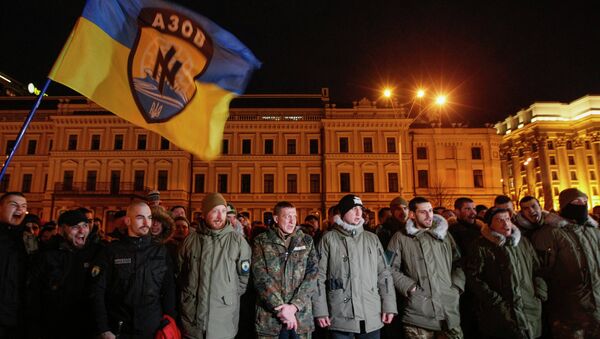 © REUTERS / Valentyn Ogirenko
Subscribe
Currently the amendment to the Rules Committee of the House of Representatives that would bar US funding to neo-Nazi groups in Ukraine is buried and no action has been taken.

DETROIT, December 9 (Sputnik), Russ Bellant — Congressman John Conyers in May introduced an amendment to the Rules Committee of the House of Representatives that would bar US funding to neo-Nazi groups in Ukraine (see Amendment to the Rules Committee Print for H.R. 4435 offered by Mr. Conyers of Michigan). Currently the amendment is buried and no action has been taken. Few are paying attention to this explosive issue.

Such a ban would certainly apply to the Azov Battalion, who openly wear Nazi symbols and glorify WWII Ukrainian Nazis who committed mass murder. Further, they were deeply involved in the shooting and burning alive of more than 100 people in Odessa last May, an event which has been very downplayed in the US media.

The Kiev regime is expanding this group and supplying heavy weapons to them. On October 9, the Ministry of Internal Affairs held a ceremony for this purpose at their Kiev headquarters. What was notable was that the ministry has its name on the building in Ukrainian and in English, so that CIA advisors know which building to habitate.

The head of this thug operation won an election to parliament and his deputy was put over all Kiev police. Note that the Kiev regime plans to put this neo-Nazi organization into the National Guard, a long-discussed plan that would apply to several dozen other paramilitary formations. So US funding to the Kiev military would easily benefit Azov Nazis and would be hard to trace.

With the failure of the Kiev regular army to retake control of Eastern Ukraine, Kiev is now discussing applying for membership in NATO, so that NATO troops can intervene in this civil war. In September, NATO conducted a training exercise on Ukrainian soil, with over 100 US soldiers involved. The US has conducted multiple naval exercises on Russia's doorstep in the Black Sea.

This aggressive military encirclement of Russia is in violation of US agreements decades old not to expand NATO and its weapons systems to Russia’s borders, now a clear military threat. Consider how the US reacted with the prospect of missiles being placed in Cuba in 1962, the US government was ready to go to war over it, even though it had placed Jupiter missiles on Russia's borders. In 1983, the US invaded Grenada over allegations that the government there was building airstrips that could accommodate Russian bombers, even though no such infrastructure existed.

The US presence is much larger in Ukraine, but is only one of manyprovacative operations put into place over the last decade. Plus, there are plans for the US to spend a trillion dollars to rebuild its nuclear weapons stockpiles, weapons which can only be considered to be used against  Russia or China. Russia has hinted that such an encirclement is a provocation to war. Certain US policy types have suggested that if Moscow did not let the US take Ukraine, it could be a cause for war.

Europe has a history of irrationally spiraling into world wars, based on senseless actions that no one would walk back from. For centuries Europe has invaded Russia, whether Germanic tribes (drang nach osten), Napoleonic French, British or Americans (twice in 1919), Kaiser Wilhelm or Adoph Hitler's Germany. Russia has not ever invaded those countries. But the drumbeat of the war party is on a steady, historically repetitive path.

Russ Bellant (Detroit, US) – an American writer, author of “Old Nazis, the New Right, and the Republican Party: Domestic fascist networks and their effect on US cold war politics”.