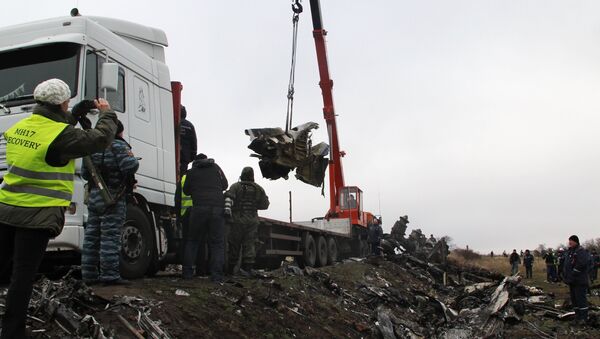 © Sputnik
/
Go to the photo bank
Subscribe
Investigators will now photograph, scan and categorize the wreckage at the Gilze-Rijen air force base in the south of the Netherlands. Later, parts of the plane will be analyzed and reassembled in a special hangar.

The joint inquiry team includes the Netherlands, Ukraine, Australia and Malaysia. Amsterdam is leading the investigation, which continues nearly five months after the crash.

Tjibbe Joustra, the head of the Safety Board, said investigators will now photograph, scan and categorize the wreckage at the Gilze-Rijen air force base in the south of the Netherlands. Later, parts of the plane will be analyzed and reassembled in a special hangar.

MH17 Wreckage to Be Photographed, Scanned, Categorized: Dutch Safety Board
"It will take several months before we have a reconstruction of parts of the aircraft," he said as quoted by AP.

The first four trucks with wreckage left Kharkiv for the Netherlands December 3, while the next eight trucks departed December 8. Meanwhile, a lot of wreckage remains at the crash site. The head of the self-proclaimed Donetsk People’s Republic Alexander Zakharchenko insists the remaining debris should be removed as well.

In September, the Safety Board said in a preliminary report that the Boeing was brought down by "high-energy objects from outside the aircraft."

The Ukraine government had accused eastern Ukrainian pro-independence supporters of shooting down the plane, but has not provided any evidence to back the claim. Local militia leaders claim they do not have weapons capable of shooting down an aircraft at an altitude of 32,000 feet.

The Safety Board’s final report may rule out one of the versions, but it will not seek to attribute responsibility. Dutch prosecutors are coordinating an international investigation, but have yet to name any suspects or say when or how charges might be brought, according to AP.

The families of some victims have raised concern about the Dutch leading the investigation.

Mother of German Citizen Killed in MH17 Crash Sues Ukraine for $1 Mln
Bob van der Goen, whose firm Van der Goen Advocaten represents 20 family members of victims, has launched a campaign for handing over the investigation to the UN.

The Dutch performance so far "has been terribly amateurish," Van der Goen said in an interview, citing the late arrival of investigators at the crash site and a failure to interview witnesses in time.

"I can understand keeping the investigation confidential, so that you don't release partial results," he said as cited by AP. "What I don't understand is secrecy about what it is you're undertaking, what the procedure is."