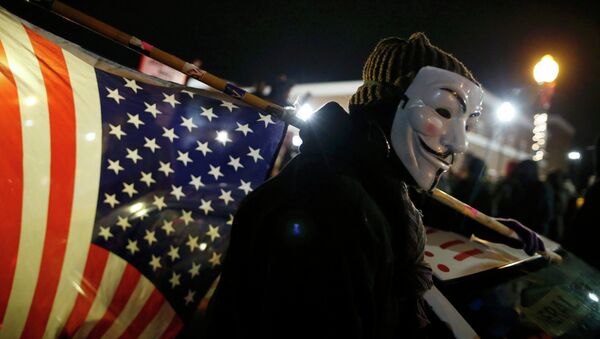 Anonymous, a well-known anarchist group usually specializing in Internet activism and hacking, is set to stage a ‘Day of Anger’ in the US and hopes to instigate what it calls the ‘Millions March’ in New York City to protest police brutality; the date is set for December 13.

Anonymous Hacktivists to Stage Million Mask March in London on Wednesday
MOSCOW, December 7 (Sputnik) – Anonymous, an international anarchist group associated with hacking, Guy Fawkes masks, and cyber-attacks on businesses and governments it considers unjust, is calling for a ‘Day of Anger’ on December 13, which will be centered around what it has dubbed the ‘Millions March’ in New York City.

The group’s post on Facebook demands “justice for Mike Brown, Justice for Eric Garner, and justice for all those we have lost at the hands of the racist killer cops.”

The group has urged its supporters to “unite and go into the streets and put a stop to this.”

The group christened the day of the event their ‘Day of Anger’, which is set for December 13.

You need to join us in the streets next Saturday in NYC: https://t.co/tTphzX9JuG pic.twitter.com/MnMMWy7yc9

“You need to join us in the streets next Saturday in NYC,” says the group’s miniblog on Twitter. However, its ambitions don’t end there; the Day of Anger “must happen in every major city, so spread the word”, reads the group’s Facebook page.

“We must not only show our power, but show that there is still hope for humanity, we must show the world these deaths are not in vain,” urges the group.