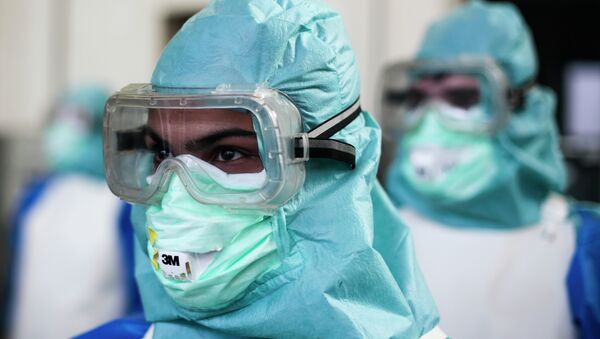 Two doctors from Sierra Leone have died from Ebola on the same day. Since the virus has devastated the country’s health care system, Nigeria has stepped in, and is sending 100 medics to help the nation.

Ebola-Infected Cuban Doctor Successfully Treated at Swiss Hospital
MOSCOW, December 6 (Sputnik), Ekaterina Blinova — Two doctors from the West African former British colony of Sierra Leone have succumbed to Ebola on the same day, according to local officials; the overall number of doctors claimed by the virus in the country has reached ten.

"The worst Ebola outbreak on record has torn through some of West Africa's weakest health systems, killing nearly 350 medical personnel, including 106 in Sierra Leone, which is still rebuilding from years of war in the 1990s," Reuters pointed out.

Sierra Leone authorities have announced they would pay $5,000 in compensation to the families of health workers who have died while fighting the Ebola virus outbreak. Questions remain as to how the two deceased doctors, Dr. Dauda Koroma and Dr, Thomas Rogers, contracted the deadly disease, since they were not working "on the frontline" in the Ebola treatment center.

"We are devastated at this hemorrhaging of our healthcare workers," said an unnamed health official, as quoted by Reuters.

Sierra Leone’s President Ernest Bai Koroma praised the country’s health workers for combatting the spread of Ebola, calling them its "greatest patriots" during his speech in the Parliament on Friday, December 5.

Ban Ki-moon: Ebola Damaged Economies of Guinea, Liberia, Sierra Leone
The number of people who have contracted the Ebola virus has exceeded 17,000. They are mostly located in Guinea, Liberia and Sierra Leone; 6,200 have died, the World Health Organization estimates. The Associated Press reported earlier that the African Union has pledged to send 1,000 medical professionals to these three countries by the end of 2014.

In order to contain the spread of the disastrous virus, more than 175 Nigerian health workers arrived in Sierra Leone and Liberia on Friday, December 5. The Nigerian government has promised to send another group of 425 medics in the nearest future to prevent further containment and "boost weak local health care systems," Reuters notes.

"This is the African spirit you are showing, this is the Nigerian spirit," Nigeria's ambassador to Liberia, Chigozie Obi-Nnadozie, said, as cited by the media source.
It is worth mentioning that Liberian President Ellen Johnson Sirleaf has banned rallies and public gatherings ahead of a forthcoming December Senate election, elaborating that the decision was aimed at fighting the Ebola virus.