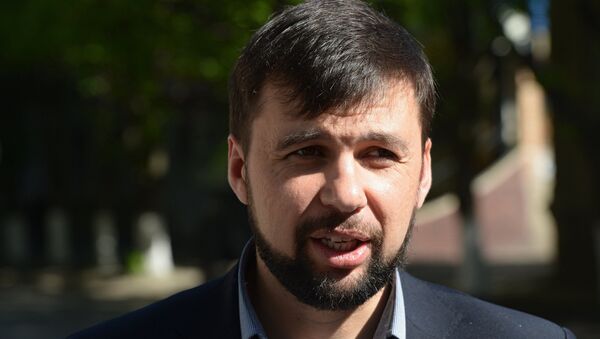 Deputy Prime Minister of the Donetsk People’s Republic Denis Pushilin has suggested holding a meeting on peaceful settlement of a conflict in Donbas on December 12 in Minsk.

“We propose to hold a meeting in Minsk on December 12,” he said on Saturday.

At the same time, Luhansk People’s Republic (LPR) head Igor Plotnitsky told RIA Novosti on Saturday that the final date for the talks is not set yet.

“The final date has not been set yet. This is due to some circumstances of the talks. There is no common decision yet, there are some proposals from the Ukrainian side, from our side, and from the Donetsk' side,” he said.

Plotnitsky stated that the exact date of the meeting will be known in the beginning of next week.

In April, Kiev forces began a military operation against independence supporters in eastern Ukraine, who refuse to recognize the legitimacy of a new government that came to power following a February coup. According to the UN, the confrontation has claimed the lives of over 4,000 people.

On September 5, the opposing sides reached a ceasefire agreement at a Contact Group meeting in Minsk. The provisions for the ceasefire implementation were agreed on during the next round of Minsk talks that took place on September 19. However, since then both sides have been accusing each other of violating the truce.

Earlier this week, Ukrainian President Petro Poroshenko announced his decision to introduce a silence regime along the line in the southeast of the country separating Kiev forces and independence supporters starting December 9.