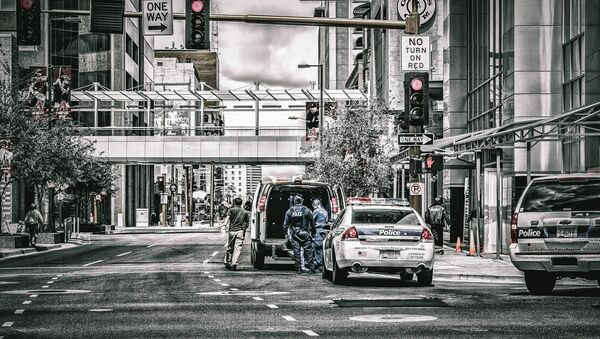 Over 200 people took to the streets of Phoenix, Arizona to protest the latest shooting of an African-American by a white police officer, who mistook the victim’s pills for a gun.

Protesters Shut Down NYC Streets Over Police Chokehold Death
MOSCOW, December 5 (Sputnik) – Over 200 people have taken to the streets of Phoenix,  Arizona, to protest yet another shooting of an African-American, the local media reported on Thursday night.

A white police officer fatally shot 34-year-old Rumain Brisbon when he mistook what later turned out to be some pills for a gun, according to the Phoenix Police Department.

The police say two witnesses had complained to the officer that Brisbon was selling drugs from his vehicle outside a convenience store on Tuesday. The officer called for backup and then saw Brisbon starting to remove something from the car’s back seat.

Ferguson Protest March Ends With Civil Rights Leader Calling for Reforms
The officer claimed to have given him several commands to show his hands before Brisbon “placed one or both hands in his waistband and fled”, the police say.

The officer chased and caught up with the suspect and during the straggle he believed he “felt the handle of a gun while holding Brisbon’s hand in his pocket”.

“The officer gave the suspect several commands to get on the ground but he refused to comply, yelling profanities at the officer,” the media quotes the police department statement as saying.

“Fearing Brisbon had a gun in his pocket, the officer fired two rounds, striking him in the torso,” the statement read.

It was subsequently discovered that Rumain Brisbon only had pills in his pocket, AFP reported on Friday.

“There are numerous witnesses that will challenge the police officer’s account of what transpired,” AFP quotes Marci Kratter, a Phoenix attorney representing the family, as saying.

According to the family’s lawyer, “It was a senseless tragedy. He was unarmed and not a threat to anyone. We intend to pursue this to the full extent of the law," she is quoted in the Arizona Republic, a local newspaper, as saying.

The incident happened as demonstrations continued in New York and Ferguson in response to similar incidents.