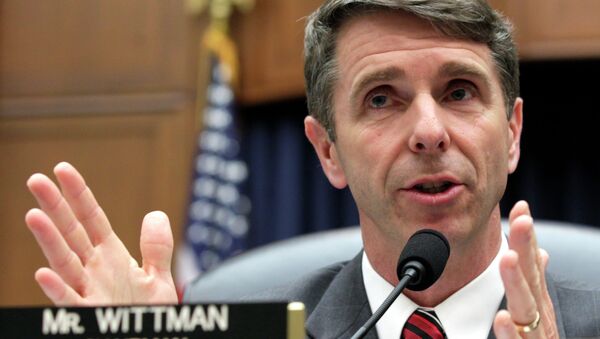 © AP Photo / Carolyn Kaster
Subscribe
International
India
Africa
Congressman Rob Wittman said that the recent US House of Representatives' resolution, urging to sanction Russia because of its aggressive policy and to ban visas for some officials, is a strategy for the US toward Russia.

WASHINGTON, December 5 (Sputnik) — US House of Representatives resolution, condemning the Russian Federation is a way for the United States to take a full spectrum approach to handling what it perceives as Russian aggression, Congressman Rob Wittman has told Sputnik.

US House of Representatives Calls for Visa Bans, Sanctions on Russia
"It is a direction we [the United States] need to move in to be very assertive about where we see Russian aggression," Wittman, who serves on the House Armed Services Committee, said Thursday, adding that the resolution, passed on the same day, ensures that US posture is "across the spectrum" and is not "one dimensional".

House Resolution 758 expresses the sentiment of the Congress that the United States should rethink some key strategic positions toward Russia and calls on the US and NATO allies to consider suspending military cooperation with Russia. It further recommends that the United States reconsider its participation in the Intermediate-Range Nuclear Forces Treaty. The resolution does not establish these recommendations as law.

In a speech, delivered on Thursday, Russian President Vladimir Putin blamed foreign governments for attempting to create a "new iron curtain" around Russia and accused the United States of constantly influencing relations between Russia and its neighbors. Even without the Ukrainian crisis, Putin claimed, the United States and its allies would have found other excuses to contain Russia.

Russia's relations with the United States and NATO deteriorated dramatically as the West has accused Moscow of destabilizing the situation in Ukraine and condemned Crimea's reunification with Russia in March.

The United States, the European Union and their allies have imposed several rounds of sanctions against Russia over its alleged involvement in the situation in Ukraine.

On April 1, NATO ended all practical cooperation with Russia, only maintaining contacts at the ambassadorial level and above.

Russia has repeatedly denied its involvement in the Ukrainian crisis and has expressed concern over NATO's recent expansion in Eastern Europe and the alliance's increased military presence near Russia's border.