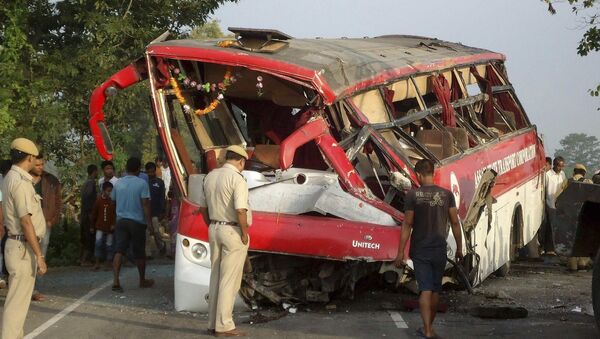 At least five children were killed and 13 injured when a train hit a school bus in India’s state of Uttar Pradesh.

MOSCOW, December 4 (Sputnik) – At least five children were killed and 13 injured when a train hit a school bus at an unmanned crossing in northern India, AFP reports, citing local officials.

"It was quite foggy in the morning when the incident took place," Jitendra Pratap Singh, a district information officer, told AFP. "Five children have been killed and 13 others, including the driver, are injured. The injured are being treated in the district hospital," he added.

BBC placed the number of injured in the crash at 25.

The incident took place early on Thursday in Mau district, Uttar Pradesh. The Tamsa Express was heading to the holy city of Varanasi, located 320 kilometers (200 miles) south-east of the state capital, when it hit a school bus, according to India Today.

A similar incident occurred in the Indian state of Telangana in July. 20 people, including 19 children and the driver, were killed when a passenger train hit a bus at an unmanned crossing, Reuters reported.

Rail accidents are not uncommon in India. Hundreds of people are killed at approximately 15,000 unmanned crossings annually, according to BBC.