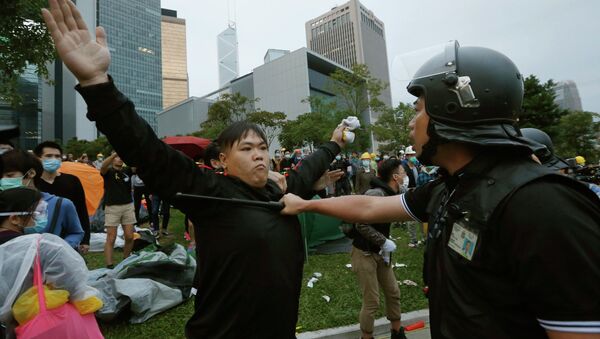 © REUTERS / Bobby Yip
Subscribe
Hong Kong authorities have demanded that pro-democracy protesters stop rallying, or else they will be stopped in a violent way.

MOSCOW, December 1 (Sputnik) — Hong Kong authorities have threatened the use of force by riot police in the case pro-democracy protesters, who caused a temporary shutdown of governmental buildings today, return to the protest sites and continue active street rallying.

The head of the Hong Kong administration Leung Chun-ying said today the police had been using moderate measures of containment against the pro-democracy protesters, but will now undertake “resolute action” after the protesters managed to paralyze the work of government institutions today.

Today’s violent clashes between protesters and police caused chaos in close vicinity to the protest sites in the city. Roads were blocked around Admiralty Centre; shoppers and office workers had hard time doing their routine due to crowding and skirmishes between law enforcement and protesting students.

"Some people have mistaken the police's tolerance for weakness," Leung said as quoted by Reuters. "I call for students who are planning to return to the occupation sites tonight not to do so."

The protesters have announced a planned hunger strike Monday night, saying they are ready to do what it takes to achieve direct elections of the city’s leader in 2017.

"Today, we have decided to do this because we feel have no other road to take," the 18-year-old Wong said in front of the rallying crowd to applause and cheering nuder a heavy rain, as reported by Reuters.

However, student activists acknowledge that attempts to take over the government HQ by a direct assault was bound to fail as police far outnumbered the protesters and were also better equipped.

“The plan was a failure on the whole, given that even if some places were occupied, they were cleared by the police immediately,” Hong Kong Federation of Students leader Alex Chow said as quoted by Voice of America.

Another student protester, Pa Sha, said that thousands of people managed to break through police bulwarks occupying the spot just outside Leung’s office. While the police have been violent, using batons against the demonstrators, they have failed to discourage the demonstrators.

“There is still a lot of energy in the people and will to fight, a will to reignite the occupation, but unfortunately the organization is very weak,” Pa said.

The Hong Kong pro-democracy protest saw an escalation in violence starting this weekend as demonstrators made a successful attempt at disrupting the work of the pro-Beijing administration.